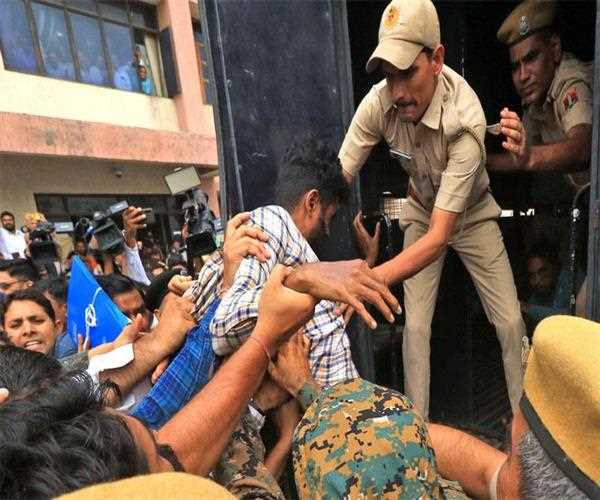 On Saturday, a huge mob attacked the four suspects in the horrifying murder of tailor Kanhaiya Lal outside the Jaipur court. After they were shown in court, the mob outside the building kicked, slapped, and hurled abuses at them as they were being led to a prisoner's vehicle.

One of the four defendants' garments was also ripped, as the enraged attorneys shouted insults at Pakistan and called for the defendants to be executed.

The accused was swiftly placed in a waiting van by the police, preventing serious injury. An angry group of attorneys attempted to attack the defendants as they were being transported back in a police car.

Two men killed 48-year-old Kanhaiya Lal on Tuesday because he had backed BJP leader Nupur Sharma, who had been banned. Riaz Akhtari and Ghous Mohammad, the murderers, recorded the crime on camera. They later released a second video in which they boasted about the killing and made threats against Prime Minister Narendra Modi. Several hours after the murder, Akhtari and Mohammad were detained. On Thursday night, two more people, Mohsin and Asif, who were reportedly involved in the alleged plot to assassinate Kanhaiya and in a reconnaissance of his shop, were apprehended. If the two who killed Kanhaiya Lal, a tailor from Udaipur, failed, the other two men were 'on standby' to murder him.

According to the NIA, Mohsin and Asif also assisted the murderers in fleeing the scene.

On Saturday, the four suspects were introduced to a National Investigation Agency (NIA) court in Jaipur. Numerous lawyers screamed, 'Pakistan Murdabad' and 'Kanhaiya ke hatyaron ko fansi do' (grant death sentence to Kanhaiya's killers) since there were numerous police presences on the court grounds.

After Kanhaiya Lal was killed, there was an upsurge in racial animosity and random acts of violence in Udaipur, Rajasthan, which led to a ban on mass meetings throughout the state and the suspension of mobile internet.

Days before his death, Kanhaiya Lal had reported to the neighbourhood police that he had received threats because of a social media post uploaded from his account that appeared to 'defend' suspended BJP leader Nupur Sharma's comments about the Prophet Mohammad.

According to NIA sources, the organisation is investigating the potential involvement of 'local self-radicalized gangs' with connections abroad. The issue has political repercussions as well because Congress and its government in Rajasthan have been accused by the BJP, which is in power at the federal level, of being lax in tackling radicalization.

The Congress seized on news reports and social media posts to make the connection between the BJP and one of the killers in the horrifying murder of a tailor in Rajasthan's Udaipur, while the BJP fiercely denied any involvement on Saturday.

At a news conference, Sadiq Khan, the leader of the BJP's minority branch in the state, reiterated that the assassination was a failure of the Congress government in Rajasthan and claimed, 'We have no links to any of the accused.'

Concerns increased after news of the same murder of a chemist in Amravati, Maharashtra, for supporting Nupur Sharma surfaced. Two weeks after the murder, the police acknowledged the connection as Union Home Minister Amit Shah requested that the NIA conduct an investigation. 'Six individuals have been detained. Senior police officer Vikram Sali stated, 'They told us they killed him because of what he posted about Nupur Sharma.

It is customary to view a judge's oral observations as obiter dictum. But they are regarded seriously at least in India.

In response to the BJP spokesperson Nupur Sharma's remarks during a news debate, several offences have been filed against her in several states. She is currently on suspension. Sharma has received numerous threats against her life over the past two weeks, with some publicly offering a reward for her beheading. This includes individuals in public positions and a member of parliament who urged Sharma to be publicly hung for her words.

Sharma requested that the Supreme Court combine all of the first information reports (FIRs) against her that had been filed in many different states because they are all based on the same case. 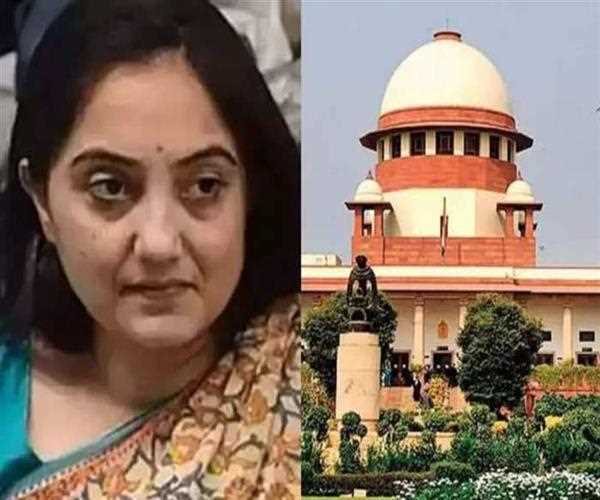 The Supreme Court stated in its ruling on Sharma's plea that she alone was to blame for what was happening in the nation and for the horrific episode in Udaipur, Rajasthan, where a Hindu tailor was murdered by fundamentalists for siding with Sharma.

Many individuals were shocked to learn of the honourable court's observation. The remark was made without any inquiry or evidence that she would be put on trial, and it was somewhat harsh. Such an observation can not only put Sharma's life in greater danger when considered in the context of the threats she has received but it can also be used as an excuse by some to harm her.

The Honorable Supreme Court questioned why Sharma had not yet been detained in one of its observations. Sharma has influence, according to the supreme court, and has been treated with respect. What evidence did the highest court use to support these accusations against Sharma, which ultimately did not appear in its decision?

It comes as no surprise that many have already started accusing Sharma of guilt, and the fact that the supreme court has given no warning or reference to the fundamentalists who are clamouring for Sharma's blood.

Several senior counsels and former judges have observed that this could alienate those who oppose street veto from the judicial process. The judiciary has a responsibility to maintain public confidence in the rule of law.

The entire country's problems cannot be attributed to Nupur Sharma on their own. The supreme court has placed the blame for the murder and acts of violence done by religious zealots in the name of Islam on a woman. In other words, Justice Surya Kant made it apparent that it was Sharma's fault that her statements 'provoked' the Islamists, not their fault for announcing openly that they would behead anyone they deemed to be 'blasphemous,' Since the Udaipur murder, in which a Hindu man was killed for merely sharing a social media post in Sharma's support, was ruled Sharma's fault by the Supreme Court, it appears that if Sharma herself experiences the violence that Islamists have declared they will commit against her, the Supreme Court of this nation may rule that she deserved it.

The supreme court will not take any action against the killers of an innocent Hindu guy who was merely expressing support for Nupur Sharma while continuing to criticise and blame her for her ideas in the name of legal action. Although the supreme court won't do anything about those four individuals, it may nonetheless criticise nupur Sharma for her viewpoints. It's okay to express one's views.

Since India is a free country, everyone has the freedom to speak and express themselves. If those murderers can do whatever they want, such as kill an innocent man in the name of 'avenging their religion,' post a video of it online, and threaten the prime minister of our nation without any repercussions, then they have no right to criticise Sharma, who hasn't committed a crime as serious as the killers.

I concur that discussing someone's religion is extremely disrespectful in our nation, and for that reason, she might have been sued for defamation. But if it had happened, how would the Islamists have had a chance to cause trouble across the nation? And why are we only considering one side of the narrative? Why doesn't the Supreme Court address the other party who disparaged the Hindu religion by saying things that aren't even true?

In a country where the majority of the population is Hindu, someone says lies about their religion and beliefs and we can’t even retaliate?  What makes that fair? But nobody wants to discuss that. Sharma, who didn't even lie but instead merely expressed the facts, is all that is in the public eye.

The Supreme Court has disregarded Nupur Sharma's case. No matter what the court decides, if a citizen of our nation feels endangered and asks to have her cases consolidated, the court ought to have at least acknowledged her request. Instead, they reprimanded her and made her withdraw her request.