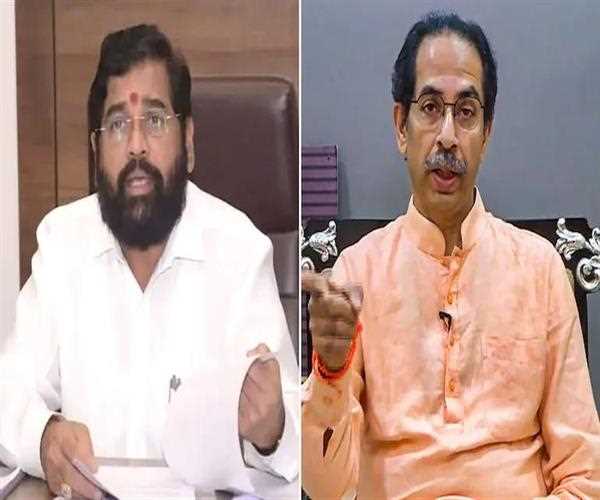 Following their arrival in Guwahati on Wednesday morning with around 40 other MLAs, a group of rebel Maharashtra MLAs under the leadership of Shiv Sena dissident leader Eknath Shinde were transported to a posh hotel outside of the city under heavy guard.
The BJP MPs, Pallab Lochan Das and Sushanta Borgohain Shinde, who first declined to speak to reporters waiting outside the airport, met the MLAs at the airport.

In contrast to the image published by the Shinde camp, which shows just 35 MLAs, Shinde claims the backing of 40 MLAs, including seven independents and 33 Shiv Sena members.
A day after the MLC elections, certain MVA MLAs cast cross-votes in favour of the BJP, sparking the state's political crisis.
As a result of the Shiv Sena MPs' rebellion against the party, the Sena, NCP, and Congress' tripartite MVA administration are now in disarray.

The Maha Vikas Aghadi (MVA) alliance government was dealt a serious setback when the Bharatiya Janata Party (BJP) won five seats in the Maharashtra Legislative Council (MLC) elections due to alleged cross-voting. In the 288-member Maharashtra legislature, where the current simple majority threshold is 144, the Shiv Sena, which leads the MVA government, which has 55 MLAs, is followed by allies NCP (53) and the Congress (44) of the ten seats in the Legislative Council that were up for election on Monday, the Nationalist Congress Party (NCP) and Shiv Sena each won two, while Congress only managed to get one.

According to a BJP source, the MLAs were moved to Guwahati for security reasons after being transported from Mumbai to Surat on Tuesday.
Following the 2019 assembly elections, the Shiv Sena broke from their pre-election alliance with the BJP due to disagreements with the party over the position of the chief minister. Instead, the Shiv Sena formed the government with Sharad Pawar's NCP and the Congress.
The rising influence of Aditya Thackeray, Uddhav's son and a minister, in party operations, caused disquiet in certain Shiv Sena members.


Uddhav Thackeray, the chief minister of Maharashtra, declared today that he was 'willing to step down if even one of the unsatisfied MLAs comes up and demands it.' Shortly after 30 of his party's MLAs elected dissident Eknath Shinde as their leader, the Shiv Sena leader addressed.
After Eknath Shinde declared that he, along with the MLAs camping with him, would carry Balasaheb Thackeray's Hindutva, Mr Thackeray responded, 'Hindutva is our identity and we are never going to forsake it.'

The Shiv Sena has been under fire for departing from its core principle of Hindutva. In light of the international outrage following the BJP's Nupur Sharma and Naveen Kumar Jindal's insulting statements about the Prophet, Thackeray recently criticised Prime Minister Narendra Modi for undermining India's standing. He also described Hindutva, the philosophy of the Shiv Sena, as respect for all religions.

The way the party is being governed and how elderly Sainiks like him are treated are two more factors contributing to the senior leader's discontent at the party.

The party's leadership has undergone a generational shift as a result of which some of its senior officials have been marginalised.

According to a senior officer in the urban division quoted by Indian Express, Shinde was 'upset' because of his marginalisation. He serves as the Mumbai Metropolitan Region Development Authority's chairman and is its minister (MMRDA). Shinde did not show much interest in the business of the MMRDA since Aaditya Thackeray, the environment minister frequently attended meetings with its commissioner.

Another area where Shinde believed he had been marginalised was on security-related issues. Shinde delighted in 'Z' level security. He fought hard to ensure that leaders of the Nationalist Congress Party (NCP), such as Pawar and Uddhav, had 'Z plus' security protection. He was disappointed when the request was not granted.

Shinde's access to Matoshree, the Thackeray family home in Mumbai's Bandra neighbourhood, has also been impeded during the past two years, suggesting that tensions between the leadership and the former ally have increased.

There have also been several reports that it has become nearly impossible to meet with Uddhav Thackeray, the party's leader and chief minister, in recent years. They don't stay in touch, a party leader was reported as saying. Who can people contact if there is a problem? Shiv Sena is increasingly supporting NCP. Ajit Pawar and Sanjay Raut, respectively, carry out the duties of the chief minister and party leader in some ways.

The Sena's choice to work with the NCP is another factor in Shinde's uprising. According to reports, Shinde was particularly enraged by Uddav's choice to establish the MVA government with the NCP and Congress.

Shinde also believes that the partners, particularly NCP, have harmed Sena's future.
Following the cross-voting in the Maharashtra Legislative Council (MLC) elections, Mr Shinde and other MLAs were sleeping at a hotel in Surat, Gujarat, and later took a flight to reach Guwahati.

As Eknath Shinde and several other party MPs arrived in Guwahati from Surat today, the political deadlock in Maharashtra reached its second day. Mr Shinde declared that he is supported by 46 MLAs and stated that he will not change parties.
According to insiders, he had requested that the Sena and BJP form a new coalition and control the state together.

After testing positive for COVID, Uddhav Thackeray virtually presided over a significant cabinet meeting. At 5 o'clock, all MLAs will gather at the Chief Minister's house for a meeting convened by the Shiv Sena.