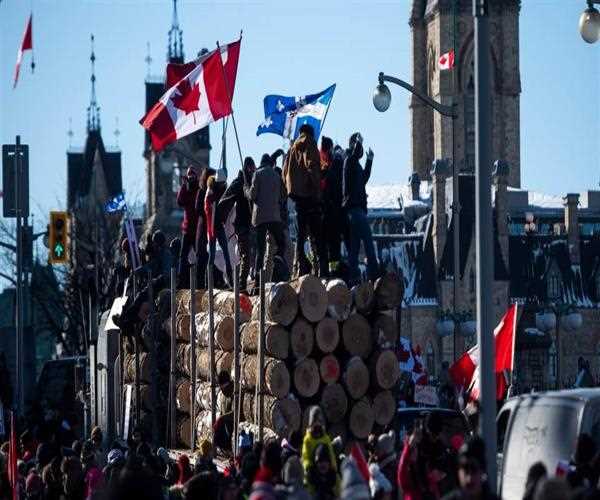 Protest against Covid-19 mandates in Canada

The Demonstrators have reached Parliament Hill for the Freedom Convoy to protest against Covid-19 mandates in Ottawa on Saturday, January 29.

Canada is facing a huge protest by the people of the country and the demonstration is spreading its roots day by day, the demonstrators arrive at Parliament Hill in Ottawa. The police authority has lodged many complaints against the demonstrators for the “description” of Canada’s National War Memorial among other incidents during a weekend protest in Ottawa. 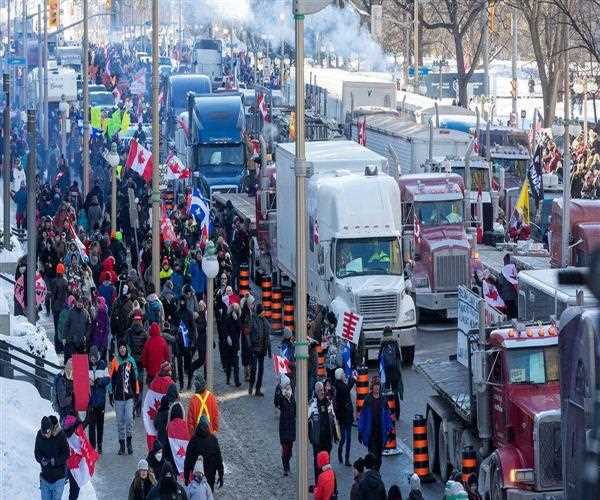 Ottawa police service posted a tweet on Sunday “Several criminal investigations are underway about the description of the National War Memorial/Terry Fox statutes, threatening/ illegal/intimidating behavior to police/city workers and other individuals and damage to a city vehicle,” revealed the Police services of Ottawa.

The protest started just after the news of mandates of Covid-19 Vaccines came in the light of people and Justin Trudeau also has told the reporters about the severity of the virus and the mandates vaccine for all eligible people of the country. The mandates require all the truckers to be fully vaccinated or face testing and full requirements. PM also told that 90 Percent of Truckers have been fully vaccinated and hence the left one will also be vaccinated soon.

Now the protest in Ottawa has become huge as it could not be ended as quickly without appeasing them and making them realize the importance of vaccines for their family and all. Whenever there is a subject of national interest it becomes a little bit forcible but the government should not let them realize that government is against their rights and freedom.

Also Read: Globally Surge In Covid-19 Positive Cases, Including The US And Europe

The long week’s protest was started with the unknown truckers protest when government officials have released new regulations for the security of the health of the individuals from the Covid-19 pandemic. When other country people know about the incident they also joined it and today it became a global concern to deal with it.

The protest is not only destructing the connectivity between the cities but also encroaching the economy of the country as the truckers are the most important of the supply chain of goods and services over the nation and after declaring the protest they have stuck at one place which also breaks the supply of goods.

The police have lodged complaints against the demonstrators for violating the laws and police advisory. Mob also committed some arsenic activity in which the government property has been fired which also added to the loss list. Demonstrators have reached Parliament Hill including many monuments of Ottawa and violate the law of the nation which comes under the crime.

The government including the healthcare officials, and scientists should tell the people of the country the importance of vaccines to conquer the novel Covid-19 virus.

healthcare covid-19 covid-19 pandemic covid-19 vaccine international issues
0
1
268
0
Written By
Sanjay Goenka
Economics can be broken down into microeconomics, which looks at individual decisions, and macroeconomics, which is concerned with the economy as a whole. Both types of economics utilize historical tr . . .