Jupiter's moon - Ganymede also known as the 'King of Moon', is 2.4 times smaller than Earth, which makes it the largest moon in our solar system. It contains more water than the whole surface of Earth. It is the first time the scientists of NASA got a trace of water vapour on Ganymede, water vapours are formed when water on Jupiter's moon sublimates which is solid ice directly converts into gas. In the series of coldest bodies in the solar system, Jupiter's moon is in the 11th position, with temperatures that can drop as low as 300 degrees Fahrenheit (-184 degrees Celsius). The temperature on the surface of Ganymede is glacial that the surface is always covered with ice.

Illustration of Jupiter and its moon - Ganymede

In 1996, the Hubble Telescope identified a tenuous atmosphere circling the moon, containing oxygen. The observations were scrutinized from the past twenty years (two decades approximately).

A combination of fresh and archival observations was used to detect water vapour by astronomers. In addition, Ganymede is the only moon in the solar system known to have a substantial magnetosphere. That indicates there is something inside helping to produce a strong magnetic field. This prompts auroras to radiate around the moon's extreme points (north and south poles). In 1998, Hubble captured the first UV images of Ganymede exhibiting these auroral bands. But some of the features couldn't be resolved and even resembled somewhat different from one another. 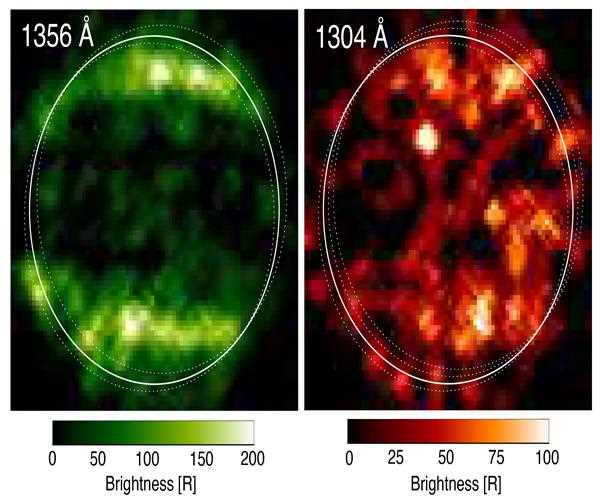 Observations made by Hubble's telescope in 1998, witnessing ultraviolet radiation which varies in day and night


Ganymede doesn't have a persistent temperature across the day and it changes significantly over the day. Around noon at the moon's equator, it becomes warm for the frosty surface to sublimate, or release small amounts of water molecules, which defines the variations observed in the ultraviolet images captured by Hubble.

Lately, NASA's Juno mission, which has been examining Jupiter and its moons from the previous time, took the first close-up images of Ganymede in two decades. The European Space Agency's JUICE mission, (JUpiter ICy moons Explorer) will launch in 2022.

'Our results can provide the JUICE instrument teams with valuable information that may be used to refine their observation plans to optimize the use of the spacecraft,' said lead study author Lorenz Roth, a researcher at the KTH Royal Institute of Technology in Stockholm, in a statement.

Knowing more about Ganymede can help astronomers to know more about how these celestial bodies and their moon formed and evolved. The new findings are crucial in the quest for extraterrestrial life and habitable environments where life can find a way.