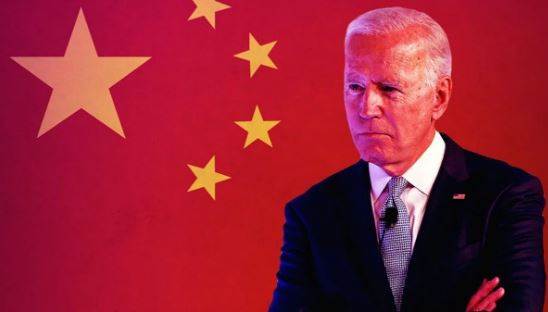 Why Is China Backing Joe Biden For US President ?

Trump is constantly attacking his opposition leader Dow Biden regarding the US presidential elections. In particular, they are surrounding Biden's China policy. Reportedly, China wants to make Biden the US president so that he can spread his business comfortably.

Since Corona, Trump has been looking very aggressive on China. At the same time, he is accusing Biden, who was the first Vice-President, of being soft on China. By the way, Biden's son has a big business in China, which costs billions. So, know what is the reason behind Biden's soft attitude.

Joe Biden, who was Vice President during the era of Barack Obama, his younger son Hunter Biden does big business in China. According to the Politifact website, Hunter started trading in China in 2008.

Later, a book was also written by a conservative writer Peter Svejer. In a book titled "Secret Empires: How the American Political Class Hides Corruption and Enriches Family and Friends", it is openly told how Hunter used his father's political position to consolidate his business in China.

Joe Biden himself went to China with his son during a business deal. Within 10 days, Hunter received a deal worth $ 1.5 billion from China's state-run Bank of China. Trump repeatedly cites this deal from China. Biden is not able to be so strict against China due to his son's deal.

At the same week, Trump's party took out its second-term agenda. One of the 10 most important tasks in this is to end dependence on China. This issue has been kept amidst important issues like creating jobs. This can give an idea of ​​China's opposition in America. The campaign also says that it will bring back the 1 million works that they have due to their dependence on China. There is also the tempering of corona in it. Under this, China was blamed for making the whole world ill, including America.

READ HERE MORE : What Took So Late For Mother Teresa To Become "Saint

Overall, Trump is a complete attacker on China. And they are also seen to clean it continuously with their tweets. Under this, recently, the American party decided not to say or not write Chinese leader Xi Jinping as president.

According to the party, none of the three official titles held by Jinping belong to the President. In such a situation, giving a presidential address to Jinping is messing with the people of China.

Donald Trump's constant failure to make a statement is also a big fear for China. Let us know that in the year 2018, Trump was very appreciative of China. Even about Jinping, he said that they love each other. But in the year 2019, they started getting tough for China, which became stronger after Corona. In such a situation, China is afraid that Trump may be an attacker for China on any matter at any time and circumstances of war can also occur.

At the same time, Biden is quite predictable and flippable. In a CNN report, an expert Minsin Pai called Biden multilateral, saying that he would walk in view of many aspects of the US, including China.

The business will be an important aspect in this. However, the interesting thing is that despite all the speculations, Biden is telling Trump the softness towards China. In his agenda, Biden took it on 22 times, referring to China. Even then it is believed that China will only get stronger when Biden arrives.

This statement is further strengthened by a statement by the National Counterintelligence and Security Center, the intelligence agency in the first week of August. The agency is expecting China to manipulate elections. Currently, relations between America and China have deteriorated rapidly due to Corona.

Trump ended many relations with China alleging negligence in Corona's case. The bloodshed of both countries is also seen on social media. In such a situation, it is quite possible that China tries to defeat Trump.

Intelligence Agency chief William Ivanina himself said that China does not want to see Trump becoming president again. There is a detailed report about this in which explains how China is trying to twist the US election according to its anti-China policies.

Biden is a democrat and thus a left-winger which is a strong fact of him being pro-China but we should also not forget not much hyped or talked about the fact that it is the deep establishment within which the runs the US foreign policy and affairs.

A quick example of it would be the Trump-Russia relation which was sought to be nice but in the end, turned out ugly as the Trump administration was forced to move out in contrast to its original stance of getting aligned with Vladimir Putin government to take on China and other communist-bloc countries. It is actually Donald Trump vs Joe Biden backed by China and at the end of the day only US citizens got the right to decide as to what is best for them.