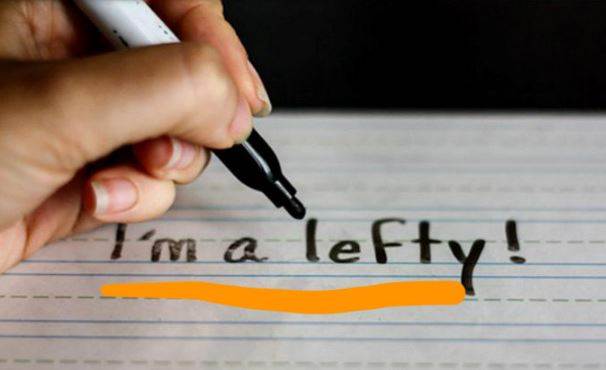 Why Is A Person Lefty After All ?

Why is a person a leftist? Why is the number of leftist people so low? To answer such questions, scientists are studying many types of theories, of which many interesting aspects are coming out.

It is being said that in the studies that are being done about this for the last century, there is also a theory of Genetic Influence.

Since the average of left-handed people across the world has shown less in every area, the genetic theory is given due consideration. Know some interesting and informative aspects related to the answers to the questions related to being a leftist.

Experts say that if you kick a ball regularly, then you will know that there is an incompatibility in the whole body. Not only in the feet but also in the eyes, ears, and brain. Expert Hanna Fry explains in this way that if you stand with your thumb at the length of your hand, first look with one eye, and then second, the eye with which you see your thumb is better.

Likewise, if you move your phone naturally to one ear, it means that your ear performs better. But, from this theory, how do we understand why the left and right people are not created equal in the world?

Some scholars believe that since humans have been accustomed to live in society for many centuries, where right-handed people have lived in large numbers and they are dominated by them.

In other words, when more people use the right hand in working or using many types of equipment, then the breeds coming from the principle of simulation also learn the same way.

Some scholars believe that because the brain is divided into two poles, which part is more active in which person, it determines which side of a person's body will be stronger or better activated.

An interesting theory is a genetics in the case of lower lefties. According to this theory, such a genetic mutation occurred in the language center of the human brain long ago in history, which led to the over-activation of the left part of the brain, increasing the number of righty people.

This theory has not been proved so far because it does not provide answers to some questions. For example, if this is the case, then the children of leftist parents should also be leftists, but this is not necessarily the case. Researches are still going on about which gene is likely to increase or decrease due to LF.

In this year, research conducted on the basis of the records of 4 lakh, people in the year 2019 said that for the first time the genetic field was discovered, which decides to be left or right. However, other researches said that there are dozens of such genes, which play an important role in deciding this.

There are many theories because there is constant research. According to another theory, the level of estrogen and how it is born can also be determined. Unlike science, a social science theory says that since in many traditions and cultures it was forbidden or bad to use the left hand as a priority, social pressure caused many people who were born leftists.

Overall, science has not yet decided whether a person is a leftie or a righty, so what are the biological processes in it. Hopefully, science will answer this soon and it will also be able to know how some people are bisexual, ie they use both hands equally.