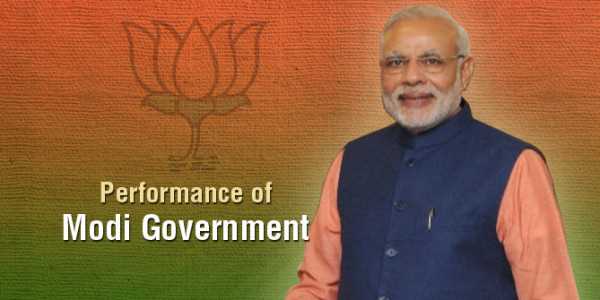 Performance of Government in the Center

At the Center, the Modi Government has almost completed its tenure and heading towards the election phase. The numeral figure of his working can represent his work story properly, but I’ll say, each number involves a story in his work tenure. As all the other parties are heading towards the preparation for the election phase, whereas, Modi government is quite different. The government has performed very well in the states as well.

Instead of so much work and development, the Modi Government faced a lot of criticism. Sometimes, it makes me feel to shout aloud that ‘Mr. P.M. we don’t deserve people like you’. Not only the politicians but also the major portion of the public is not valuing your work. They are only seeing what trouble they are getting, but they don’t value that after this trouble they will get this development for their lifetime.

People are not valuing that various projects have been introduced by you, just for the welfare of the public. You re-started many projects that were stalled and became the problem for commuters. People don’t realize there is no any profit for you, it is only for the development of the city and its citizens. These peoples were blindfolded for the past so many decades and didn’t realize what their needs are. But now, when they are getting all these facilities then they are not even willing to adjust or value the progress.

The government also give its complete interest towards the development in Agriculture field and extended their helping hand towards farmers. As well as, introduced many programmes for increasing agricultural production and productivity. It includes Pradhan Mantri Krishi Sinchayee Yojana, Soil Health Cards, Fasal Bima Yojana, etc. These programs encouraged small entrepreneurs and innovators through easy finance.

All these initiatives represent that the government is not only looking to diversify the sources of growth but also to democratized growth by understanding the potential of people from all the sections of the society.

Overall, from my point of view, the government performed exceptionally well in such a short time period as compared to the other previous government leaders.