Amidst the pandemic, fall of Afghanistan and wrought by Delta, one more tension that is occupying the world’s focus is China’s overwhelming control in the South China Sea.
Recently, China has begun the Naval Exercises at the disputed Sea and it aims to make it a Navigation Restriction Zone.

The exclusion zone stretches from the south-eastern Hainan Island to a majority of the area around the Paracel Islands. Now, China has also begun claiming the Paracel Islands are Xisha Islands! The dispute is that these islands are also claimed by another bidder, Vietnam. Surprisingly, Vietnam was also the owner of the South China Sea, which China has acquired through manipulation and use of force.

Not just Vietnam, but the Philippines, Malaysia, Brunei & Taiwan also have counterclaims against the South China Sea.

Meanwhile, the US is conducting military exercises in the Indo-Pacific region along with its English, Aussies, and Japanese counterparts. Reports claim that this exercise involves the first large-scale naval & amphibious drills with its allies including the NATO nations.

A British aircraft carrier strike group led by the HMS Queen Elizabeth carrier; a German warship sailed through the South China Sea on August 2. The US aims to signal its competitors that’s why it is periodically sending its naval & air patrols in the South China Sea.

Alongside all this, the Indian Navy is also deploying a naval task group comprising 4 frontline warships to SCS, Pacific, and Southeast Asia. It is being deployed for over 2 months. India’s aim behind this is to enhance its influence in the strategically key sea lanes and it is also going to participate in Malabar exercises with its QUAD allies. 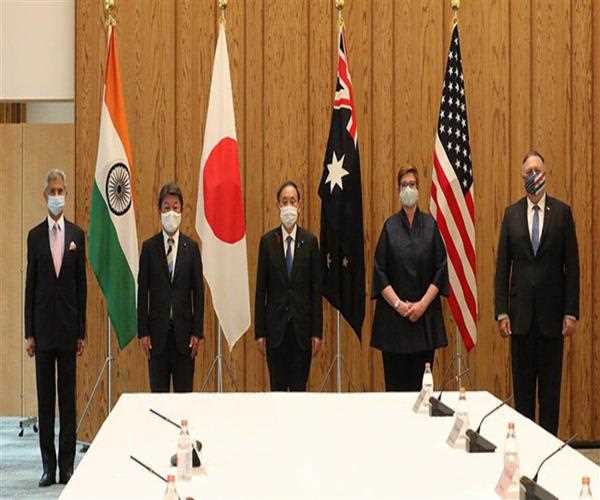 China and Russia have joined hands on many things including this: they held joint drills from August 13 in Qingtongxia Combined Arms tactical training base in China. This drill aims to test joint reconnaissance, early warning, electronic information attack, and strike capabilities. With both the countries conducting such a drill, there is a possibility of a PLA rocket & other 5 anti-ship ballistic missile exercises to be conducted between these two nations.

The question is, is the world going to be divided among superpowers? On one side we have big nations like India, the US, Australia, and Japan and on the other side, we have China and Russia (both enemies of the US).

Also, even if Australia doesn’t share its borders with China or the South China Sea, then what are its interests in the area?
Apparently, their leaders say that their interests are in maintaining stability over the region and among the regions that are interested in SCS. Australia has also openly admitted that its support and devotion is for the United Nations resolutions.

In fact, as China’s power in the region grows, Australia and Japan have reportedly signed Defense ties. When they were supposed to conduct military and naval exercises together with India and the USA, then why did they sign this pact? Are Australia & Japan creating other imaginary situations between them? Where will this last?

The SCS is home to 1/3 of the total World’s trade, which accounts for $3.3 trillion. Also, it harbors China’s ambitious 80& trade, and 39% energy imports.
That’s why this Sea is a cause of worry for many countries.

Not only trade, but this region is also strategic in terms of geopolitical power because it is located in the Western Pacific region. This region has become the most important zone of conflict in the 21st century as well as the arena of superpower.
Due to the aforementioned presence of warships in the South China Sea, it is being converted into a war zone!
Since SCS helps in connecting the Indian Ocean with the Pacific Ocean that’s why it is strategically important for India. Also, the busiest strait in the world, the Strait of Malacca is closely located with this Sea.

•    If China gets control over this sea, it can not only block the Strait of Malacca but also take control over the SCS all by itself.
•    This region is home to Crude Oil and Natural Gas too.
•    It contributes 10% to the total fish production in the world.
•    China has controlled the islands of the South China Sea since 1947 and did many constructions there. It was eyeing the sea since World War II when Japan left it.
•    The famous U-shaped 11-Dash Line has been constructed there by China only. Later, it was reduced to 9 Dash Line.
•    The Exclusive Economical Zones of many countries coincide in the SCS that’s why it has become a region of territorial dispute.
•    China also erected so many infrastructures in the disputed region threatening global peace & stability, despite the Declaration on the Conduct of Parties in the SCS.
•    They also made the region militarised and radar system.
•    Freedom of navigation is also restricted now.
•    The long-standing China-Taiwan war is also the cause behind the SCS dispute. 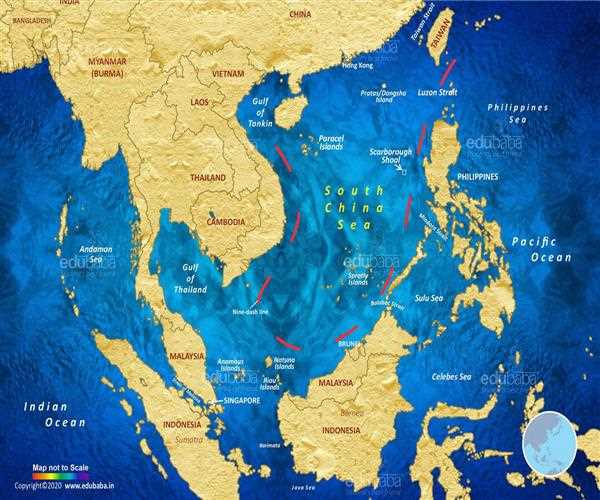 Major powers involved in the tussle:

•    The lead role goes to the USA. It is an important trade route to the USA because it uses this route to send commercial vessels to East Asia.
•    USA also has the capacity to enhance its Indo-Pacific policy even more.
•    There have been many navies, military, and air patrols deployed in the region using the Freedom of Navigation pact.
•    European Union also deployed its warships in the region.
•    UK deployed its aircraft carriers too. They submitted the reports on ‘baseless claims by China’ in the UN.
•    Japan deployed its missile destroyer in the region and rejected China’s 9-Dash Line claim.
•    Philippines and Vietnam have been supported financially by these bigger countries too.
•    Australia has been conducting constant air patrolling and warships deployment in the region.
•    India is also taking a provocative stand instead of a neutral stand in this region, by its active involvement. India is conducting oil exploration projects in the SCS. Navy and army have been deployed by India.

These points are enough to prove the clarity of how the important South China Sea is for geopolitical, trade, and territory purposes.

Now, the ultimate question rests on the fact, whether all this active involvement lead to World War III (for territorial land disputes) that will divide the nations on the basis of their power?

Are there no other important issues to consider rather than baselessly claiming some part of the land?


Is China’s growing aggression and blockage of freedom of navigation a signal that the other countries should get alarmed?

What is the point behind all this? According to my, the freedom of trading & traveling is getting reduced day by day. Also, world peace is being continuously threatened and we will not achieve it unless countries like China & Russia stop the provocation.

If the region is important geo-politically, then why can’t we deal with it peacefully? Why are the peace agreements being violated again and again?

Comment your views on the topic and feel free to leave feedback for the above opinion.