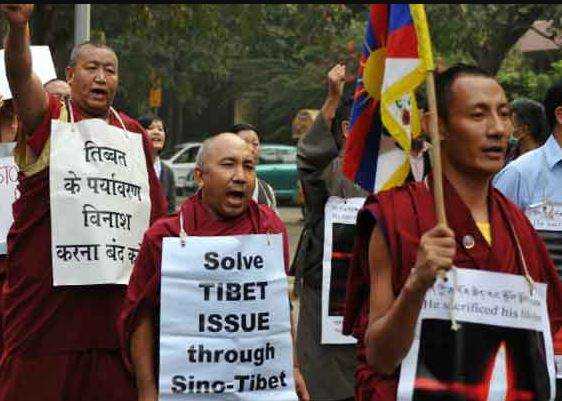 Tensions have deepened between India and China over the India-China tension at LAC in eastern Ladakh. Apart from a sporadic military confrontation, there is also a war on the diplomatic front.

However, even after giving a befitting reply to the clash, so far India has taken the path of peace. Meanwhile, political analysts are constantly discussing why India does not use the Tibet card to sack China. Know, what is the Tibet card and what can be its advantage or disadvantage to India.

In fact, the Tibetan religious leader Dalai Lama living in India, leaving Tibet, is recognized all over the world. The Dalai Lama got sympathy from America to all the strong European countries against the excesses of China.

Now China fears that with the help of the Dalai Lama and other exiled Tibetans, India may open a new front against China. China's official media Global Times also threatens India not to do so.

Why is India avoiding it

However, India never adopted this method against China. To understand the reason for this, one has to understand the history of India, China, and Tibet. After the Chinese occupation of Tibet in the year 1959, the Dalai Lama, the leader and religious leader, fled to India.

Along with him came a large population of Tibetans, who have now settled in many parts of the country, from Dharamshala in Himachal. While staying here, the Dalai Lama is barricading against China and constantly raising his country's independence from China.

India had considered Tibet as part of China

China has been teasing India since then for giving shelter to the Dalai Lama. Especially China often expresses displeasure at agreeing on the beliefs of the Dalai Lama of India. Well there is another aspect to it. In 2003, the then PM Atal Bihari Vajpayee government considered Tibet as part of China and China considered Sikkim as part of India.

It was a kind of agreement that the two countries should not interfere in mutual matters. The President of China was Jiang Zemin then. At the same time, instead of officially calling the northern border as the Indo-Tibet border, India started calling it the Indo-China border. This was a recognition of China's authority over Tibet.

What can trouble China

Despite this, it is now being said in the current circumstances that India should open its leaf against China. However, there are many reasons behind India's not doing so. For example, if India takes help of Tibet in the worsening situation or talks about its being an independent nation, then it will be a violation of the negotiations with China in the year 2003. It can also happen that China starts asserting its right over Sikkim again. At the moment, any new dispute between Corona to a shaky economy can put the country in trouble.

This is a big reason for the silence

A report has come in the Eurasian Times, counting the reasons for avoiding the Tibet card of India. In this, it was told by The Hindustan Times that why this card is not running in the ruling party. It is believed that the then Congress government gave shelter to the Dalai Lama and spoke openly in his favor. The result of this was the Chinese attack on India in the year 1962.

According to the report, China has always feared that the Dalai Lama and India, considered the most important in Tibet, can bring instability in China. Due to this fear, he had become aggressive earlier and may become angry again. This is a major reason for the silence on India's Tibet issue.