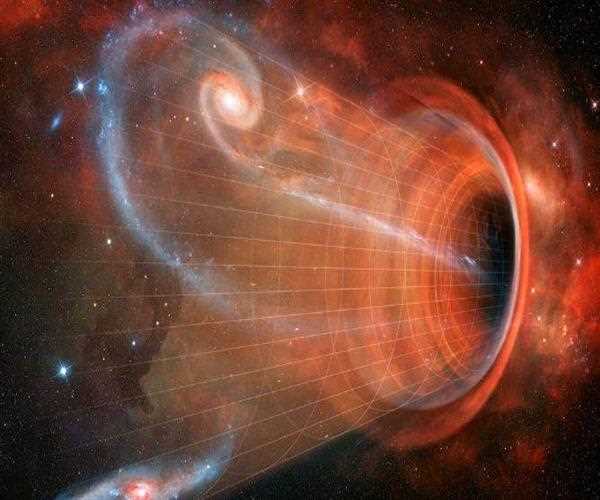 Is Black Hole Open Gateway To Other Planets ?

How many films have been made about the black hole? This is the place of space where no laws and regulations of physics work. Its gravity is so powerful that after entering it nothing can come out, even light. Whatever light falls on the black hole disappears within immediately.

Some time ago, scientists found that this mysterious celestial thing is growing continuously and despite it, its size remains the same. Even after growing, the answer to not growing in size has been found now. Know, what is a black hole and how it has shrunk even after growing.

Black holes can be considered as the last time of a star. When a huge star is nearing its end, it starts shrinking within itself. Eventually, it becomes a black hole that can swallow any of the biggest things inside.

The attraction of the dying star increases so much that all the matter within it collapses and takes the shape of a small black ball. Now it has no volume but the density remains infinite. After this, it starts pulling all the objects in the space towards itself. The more things fit within it, the more its strength increases.

Stephen Hawking gave the fact of the event horizon on the black hole. Its exterior is called Event Horizon. Radiation keeps coming out from it, which has been named Hawking Radiation.

Because of this, there comes a day when a black hole loses its mass. Going into this black hole, light, time, space all lose their meaning. No one has known what will happen after moving here. It may be that you reach a new planet or it burnt down. It can also happen that you stay inside the hole and remain the same for eternity.

Professor Leonard Suskind of Stanford University did a lot of research on why they did not swallow the whole space after growing up. He created a hologram by giving the toy models the appearance of a black hole and spent years researching. It was found that the volume and narrowing of the black hole increase simultaneously.

How fast this process is, no idea of ​​the laws of physics has been established at this time. Because of growing with both things, both also keep cutting each other. This is the reason that even after continuously increasing, the size of a black hole remains the same, even if its power increases.

California Institute physicist John Priscilla also finds Professor Leonard's theory interesting. They say that this idea of ​​complexity is good and further research can be done on it. However, no one currently agrees on this theory.

Considered a black hole expert, Douglas Stanford, also a researcher at the Institute for Advanced Study at Princeton, says whether a black hole has an internal clock that moves over time.

The black hole cannot be understood at present with the help of known facts of physics, for this, imagination has to be taken forward.

Space Science and Technology
28 days ago