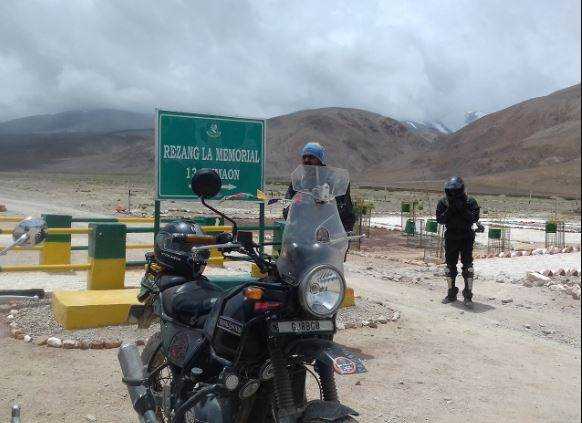 Tensions between India and China over the last few days of August, as China attempted unsuccessfully to infiltrate the Indian side of the Line of Actual Control (LAC) near Chushul in Ladakh in Ladakh.)

Remains and diplomacy continue at diplomatic level. According to the latest news, the point where the two forces were engaged in the night of 29 and 30 August in Chushul sector was the area near Rezang-La-Ridge Line. This area has been the pride of India in the last war.

For more than three months, there has been tension under the Indo-China border in Ladakh. The Western Command of the People's Liberation Army of China remains aggressive in this area while the Indian Army has also strengthened its position here. Given these conditions, know about Rezang La, where the situation remains critical after the bluff of China.

Rezang La is a mountain pass on the Wa Stavik Line of Control, located in Ladakh in the Indian part, but the China ruling has been claiming it. India's claim to this part of the Spungur Lake basin in Rutog County has been strong.

This pass is 11 miles south of Spangur Gap. Its height is 18 thousand feet above sea level and Rezang Lungpa is also the source of the stream here.

Since the month of May, Indian and Chinese forces were engaging in the area around Pangong Tso Lake in Ladakh. The recent point of this tension has become Rezang La, which is important for China in terms of infiltration because from here China gets a way to Leh.

At the same time, India gets a clear view from Rezang La to the northern shore of the lake, so it is an important front of India.

Since it is a very high-altitude location, India has an advantage here. For this reason, the Chinese army has been eyeing the post on this area. From this pass, India is able to monitor the Spungur Gap, Lake as well as the Moldo Garrison area of ​​China.

Now it is also important that if there is war, one of the 13 possible routes for China to enter India is Rekin La, which is near Rezang La.

From the Galvan Valley to Pangong Tso in the event of war, Darpuk Shyok Daulat Beg Oldi ie DSDBO road will prove to be very important, but according to experts, the Indian position on Rezang La and Rekin La is in the Chushul and Spungur area of ​​the Chinese.

It will be a big plus point to thwart the plans. Despite this, India needs to be very cautious in terms of security here.

The blacktop and helmet top hills considered to be in the possession of India obstruct the view of Chushul. This means that if the Chinese army moves towards India from Moldo Garrison, it can be helped by the height of this route.

During the India-China war in 1962, India fought the most courageous battle of its war history on this Rezang La. Major Shaitan Singh made history on this pass on 18 November 1962.

The C Company of Kumaon Regiment was stationed here on three platoon positions. Since the Indian Army's arsenal was a hill away, this company had to fight a shortage of ammunition.

At that time it was expected that the Chinese army would come from the dry part of the river and attack it. The same thing happened and the Indian Army fired fiercely with machine guns and drove the Chinese army.

But the Chinese army again arrived in large numbers and started attacking. Then Major Shaitan Singh, despite many wounds, went from one post to another and second to third, and incited the spirit of fighting among the soldiers and himself fought the best.

Of the 120 personnel of the C Company, 114 were martyred, of which 6 were left, 5 of them were taken hostage by the Chinese army in an injured condition.

On the memorial built in Rewari in memory of the Rezang La war, it is written that these heroes killed 1300 Chinese soldiers. Shaitan Singh was awarded the Param Vir Chakra posthumously for courage in this war.