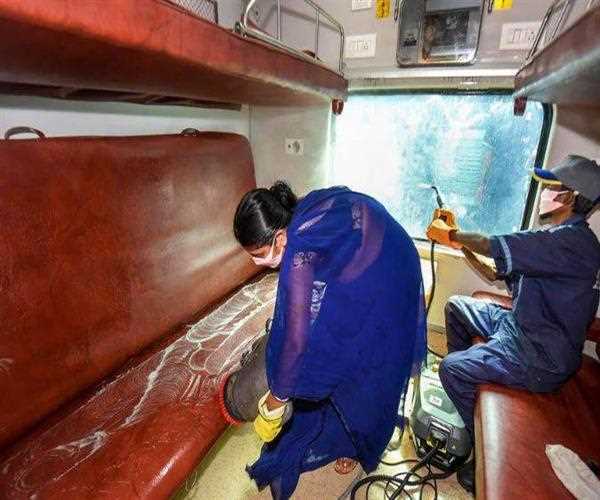 How Will Be Post Covid-19 Trains ? : Know It's Features

After travelling from Covid-19, train travel will not be the same as before. Railways is considering a plan for a major change. According to the plan of zero-based timetable, 500 regular trains and 10 thousand stops will end.

Under 'New Normal', you will be able to travel by train only due to need. Trains in which 50 per cent seats will remain vacant will be closed. Not only this, during the journey of the train, but many changes also have to be considered by the Rail Passengers as 'new normal'. What will they be?

According to the zero-based plan, any stoppage will hardly be possible before 200 km. The speed of passenger trains is expected to increase by about 10 per cent, while 15 per cent new trains will run in the special corridor. During the Coronavirus epidemic, the railway started the journey of trains in a systematic manner from May 12 and now a big policy is being made for the post-Covid round.

Since the festival season is coming soon across the country, the load and demand of the passengers will increase. Around 80 new trains can be started from next 12 September. Before this, 230 trains have already been restored. You have seen the changes like not getting food with sheets, pillows, blankets in trains. Now see what else is going to change.

In this special coach, all the facilities will be 'hands-free'. Such as taps, soap, toilet strings and flushes, etc., you will not have to touch with the hand but will have to press with the foot. In addition, the plasma air purifier system will be in this coach, which is preparing to launch the railway soon for the safety of passengers. Similarly, such coaches will have doors opening in the compartments with the support of the arm.

Since copper has antibacterial powers, railways are in the mood to coat copper on some surfaces to prevent infection. The scope of infection should be kept to a minimum and social distance can be followed as much as possible so the railway is going to launch the ticket check system through a scanning device with QR code. North Central Railway has launched this contactless system.

Bedrolls and hand napkins provided in AC coaches have not been given since the Railways resumed services after the lockdown due to Covid 19. Now passengers in trains will have the option to buy disposable blankets, pillows and sheets with one time use at cheap rates. In the near future, the railways are not in the mood to provide bedrolls as before as the washing costs up to Rs 50 per bedroll and the railway currently has around 18 lakh linen sets.

With the introduction of trains again from May, the Railways also stopped giving food. Even now the railway is not about serving cooked food but is able to give ready to eat ie packaged food. And according to the news, it will remain so for some time ahead. Some railway divisions also see the possibility of long-term contracts with packaged food suppliers.

People in the country facing the coronavirus are very scared of travelling in trains. Now the challenge before the railways is that they can assure the people that trains will be safe for them. In the matter of this concern, the report quoted EY India partner Rajaji Meshram says that the behaviour and reasons for travelling are completely different now, which will also have an impact on the railways.

Although Meshram admits that the railways have been the least affected in terms of public travel, yet since the circumstances are very different from before, it may take a year or more for the railways to return to normal operations and service again. Railways are trying on their behalf to give passengers the assurance of safe travel, but now the decision to travel has been completely different from before, this reality cannot be denied.