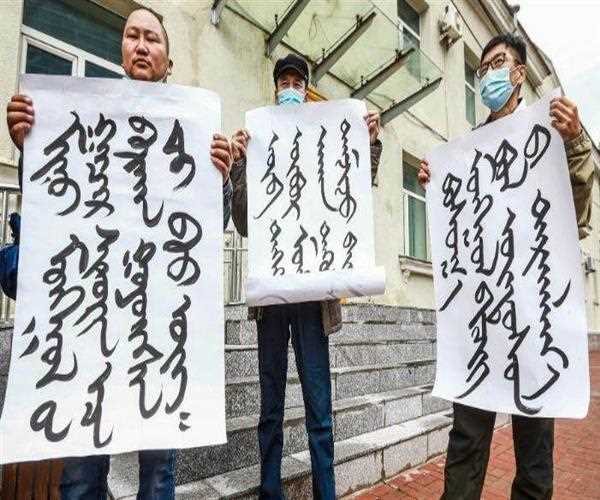 Ethnic Genocide Of Mongols In China : People Take Down To Streets Against Dragon

To take away his language from someone is to destroy his entire history, knowledge and his cultural heritage. That is, if you attack the language of a community (Ethnic Genocide), then that community will make every effort to escape, even if there is rebellion. Something similar is happening in China these days.

How is China adopting different tactics to crush Uygar Muslims in one part of China is not hidden from the world. Now know how thousands of people in Inner Mongolia have taken to the streets against China.

During Corona pandemic when the schools came to an end after some outbreak of infection, parents in Inner Mongolia faced a new problem. Rules were issued to teach three special subjects in schools in Mandarin, the official language of China instead of Mongolian. Before knowing about this rule and this attack of China, one should know how long this story is.

A book titled 'China Cultural Revolution' was written by 75-year-old historian Lamzab Borjigin, which, having difficulty in printing, Lamjab secretly printed 2000 copies of it.

The Chinese government banned this book and despite much efforts, China could not confiscate more than 1100 copies. In a rage on Lamazab, China put him under house arrest for just three hours.

Actually, this book of Lamajab narrates the dastardly story of the repression in Inner Mongolia which China has done in the last 50 years. In this repression, which has been perpetrated since the 70s, how China hatched a conspiracy to kill an entire nation by killing 1 lakh people, how tortured a how culture was destroyed, this book, this entire history Puts it in front.

Centuries ago, Inner Mongolia and Outer Mongolia combined to form Greater Mongolia, but since the time Chinese eyes came into view, changes in settlements and populations started here.

In 1911, when China became a republic from the monarchy, Mongolia was also expected to be independent, but Mongolia could never be completely independent despite Russia's help. In particular, Inner Mongolia remained occupied by China.

Inner Mongolia means 12 percent of China, but the way in which the population equation changed here from 1911, the result of this was that after the communist revolution of 1949, the Mongols had become a minority here and the Han community of China was dominating here. As we told you about the cultural repression policy of China in the report on Uygar Muslims.

After this, when Mao declared an aggressive policy in the 70s with the view of expanding the culture of China, and since then China has executed at least four and a half million people and killed many castes and cultures. These include Mongol settlements and population.

A report citing experts says that despite international pressure on China for repressive policies in the case of Uygar Muslims, China wants to completely eliminate the scope of every opposition by including minorities. Due to similar intentions, the policy of so-called 'education in the national language' is being forcibly imposed in Inner Mongolia.

According to the reports, the head of Germany-based exile group Inner Mongolian People's Party, Temtasiltu Shobtsud, has said that 'it is China's tactic to end the Mongol language. While human rights are discussed all over the world, no one is listening to the voice of Inner Mongolia.

READ HERE MORE : How Much ATM Machine Have Changed Over The Time?

Many people of Inner Mongolia, who have understood this evil intent of China, are demonstrating in large numbers. Slogans are echoing in these demonstrations. Many women are giving their signatures or thumbprints in the ongoing signature campaign against Chinese policy, which is circulating on social media.

Protest against this new law of teaching three major subjects like politics, history, and language and literature in the official Mandarin language of China is growing strongly.

If parents are rescuing their children from boarding schools, then they are deciding not to send them to normal schools. Generally, where 1000 children were registered, now only 40 are being registered. All Mongols seem united for their mother tongue.

On the other hand, a large number of anti-riot police are deployed to crush the protests of hundreds of thousands of people and China is doing everything possible to force its cultural offensive.