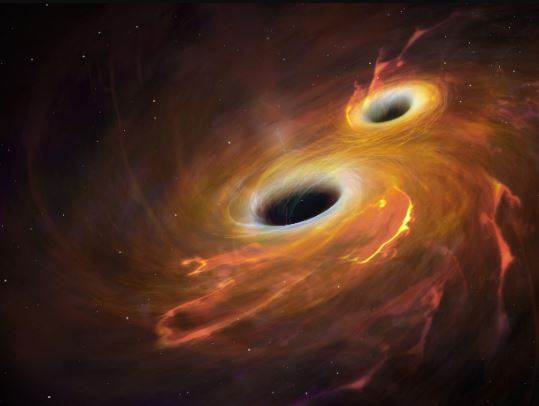 Apart from this, now scientists also get to know about blackhole related events through Gravitational waves. Recently, the team of international scientists has caught the largest and farthest black hole merger ever.

This is the first time that the process of manufacturing a blackhole 142 times heavier than the Sun has been observed. The merger was captured by the gravity interferometer Gravitational-Wave Observatory LEGO (LIGO) and gravitational wave astronomers from Italy-based Vargo (VIRGO).

This black hole is formed by the merger of two black holes. A gravitational wave that came for only 0.1 seconds was born when two blacks weighing 85 times and 66 times the weight of our Sun were merged under a binary system. That is, they collided with each other while circling each other, forming a huge black hole. This merger created gravitational waves that reached the Earth 17.2 billion light-years away and were detected by detectives of Lego and Vargo on 21 May 2019.

This new black hole is named GW190521 by scientists. This is the farthest of the gravitation waves ever caught by the gravitational wave detector. Black holes are usually formed when very heavy wires merge. It is the location of the center of a galaxy that is not visible. It stores a very large amount of matter in a very small place.

READ HERE MORE : After PUBG Ban In India You Should Delete All Chinese Apps ASAP

The discovery has been published in the Physical Review Letters and the Astrophysical Journal Letters on Wednesday. Professor Archana Pai of IIT Bombay, one of the key scientists involved in the discovery in the report of Indian Express, has said, "Blackhole of the solar load from 65 to 120 cannot be formed by merging of stars because huge stars are very unstable. But the 85 solar load black hole in this binary system suggests new possibilities in the construction of blackhole.

Researchers from many other places, including America's Rochester Institute of Technology, say that the observatories on Earth have detected the dislocation caused by the mutual merger of about 10 black holes in space through gravitational waves, but these black holes The origin of the merger of K is yet to be explained.