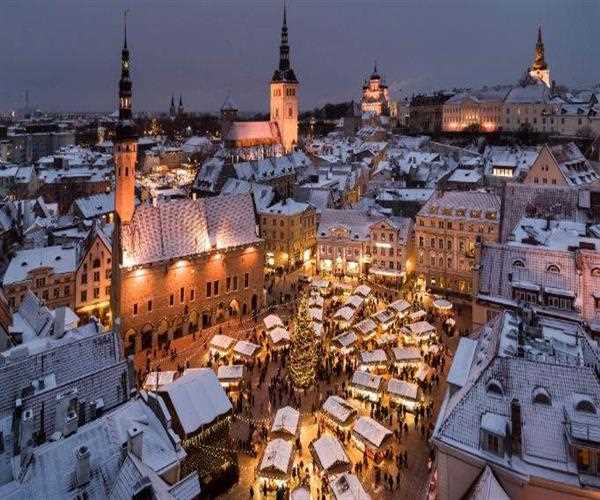 Estonia A Country With Free Internet Yet No Cyber Crime

Mobile analytics company Opensignal recently compared internet speeds in countries around the world. It was found that though the internet is available in India at cheaper rates, it is far behind in speed.

India's name is not even in the top 10 list. On the other hand, India is not at the forefront of the internet plan being available at a low cost. There is also a country in Europe, where the whole country gets fast internet for free.

The Internet is free in Estonia, Europe, and every facility is online. Citizens here pay a fee for filing tax returns, car parking, and dog boarding online. If you believe Freedom House, an NGO of America, then it is the model country of free internet access in the whole world. Apart from the Internet, there are many other things that make this country special.

Situated on the east coast of the Baltic Sea in the northeast of Europe, this country was previously part of the Soviet Union. It separated from Russia in the year 1991.

Since then, there has been a rapid improvement in the falling economy here. First, the Estonian government implemented a flat income tax system for its citizens, that is, every citizen has to pay the same tax.

With this, a countrywide program started in Estonia in 1996 to make the economy more effective by connecting citizens with the Internet and today it has become a fully digital country.

The currency of Estonia, considered the smallest member country of the European Union and the North Atlantic Treaty Organization, is the euro. After the separation from Russia, there have been rapid economic reforms and today this country is counted among those countries of the European Union where the rate of economic growth is the highest.

Here in the year 2000, the internet was free in all schools and colleges. Nearly 90 percent of people are taking internet connectivity here. The goal of the Ministry of Economic Affairs and Communications is that by next year, by 2020, every citizen of the country can learn to use the free net.

There are more than 3 thousand free wifi spots across the country, including coffee shops, petrol pumps, restaurants, school-colleges, hospitals, hotels and all government offices. Voting in elections is also done online here.

Despite having free wifi everywhere in the entire country, cybercrime is not equal here, which is surprising in itself. The reason for this is also believed that the Estonian government keeps running campaigns on the correct use of the net from time to time.

Although the internet is free here there is a restriction on access to many things. For example, under the Gambling Act, any domestic and foreign gambling site needs a special license. They are closed if they do not have a license.

By March 2020, the Estonian Tax and Customs Board shortlisted 1200 websites that needed to be closed because they did not have a license.

The Internet is not only free in Estonia, but public transport is also free here. For the first time in 2013, Edgar Savissar, the then Mayor of Tallinn, took this decision.

Their thinking behind this was that since there was a lot of conflict between each other while being a part of Russia, then the people of the country got maximum opportunity to mingle.

The referendum was held here for free transport and after getting huge support, buses and trams became free.

Even if we talk about clean air, Estonia's name comes at the top. According to data released last year by the World Health Organization, Estonia is one of the few countries where air quality is the best.

Apart from this, the names of Finland, Sweden, Canada, Norway, and Iceland are included in the list. In addition to Estonia, France and Germany are also planning to make public transport free to deal with air pollution. Free buses run on weekends in Wales in the UK.