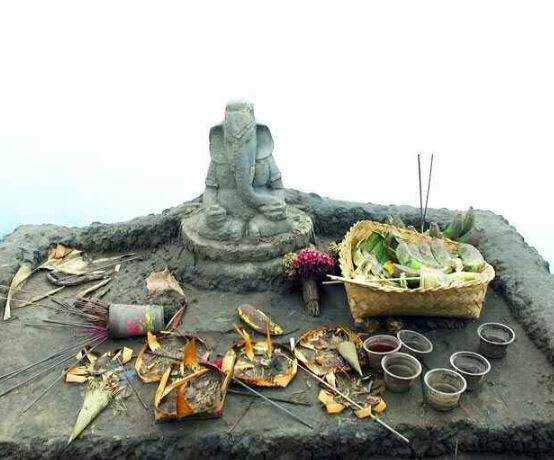 Bhagwan Ganesh On Volcano Site Is Special For Indonesia

Indonesia is seemingly getting trending due to it's near volcano situated idol of Bhagwan Ganesh who is the first god in Hinduism which is the eternal religion of the world and is known as Sanatan Dharma.

Ganesh Puja has been going on for the last five days across the country. By the way, Ganapati is considered not only in the country but in many parts of the world. Indonesia is one such country. There is a Ganesh temple at the mouth of an active volcano. There is an annual Jalsa in this temple, in which people play life and worship Ganesh for 14 consecutive days.

There are a total of 141 volcanoes in Indonesia, out of which 130 are still active, that is, it keeps erupting every now and then. One of these is a volcano on Mount Bromo. Being one of the most active volcanoes in the world, tourists visiting Indonesia are not allowed to go to many parts of it, but the volcano is also dangerous for the people of Ganesha Temple (Ganesha) at its mouth. temple). It is believed that they are still safe from Ganesh worship

Mount Bromo means Brahma in the local Javanese language. Although the temple here is of Ganesh. Locals believe that this statue has been there for 700 years, which was established by their ancestors. According to belief, this Ganesh idol has been protecting them even after being near the burning flame.

This is the reason why a tribal group in the east, known as Tenggerese, has been worshiping Ganesha for centuries. This Ganesh temple is known as Pura Luhur Poten. The specialty of the temple is that there are different types of idols of Ganesha and all the idols are made from the frozen lava of the volcano.

READ HERE MORE : Why Is China Backing Joe Biden For US President ?

About 1 lakh people of this tribe live in 30 villages built around Mount Bromo. They consider themselves to be Hindus and Hindus believe in customs. However, some Buddhist customs have also been added to their customs over time. Just like these people worship Trimurti (Brahma, Vishnu, Mahesh) as well as Lord Buddha.

Among all the customs, special worship is of great importance in Tenggerese. They worship Lord Ganesha for 14 days every year in the Ganesh temple at the mouth of Mount Bromo. This puja is called the Yadnya Kasada festival.

This puja is believed to have started from the 13th to the 14th century. There is also folklore behind it, according to which God gave 14 children to the royal queen who was childless for years, on the condition that on the 25th and the last child they would offer the mountain. Since then, every year the process of worship and animal sacrifice started. Even now goats are sacrificed here.

Apart from this sacrifice, fruits and flowers and seasonal vegetables are also offered inside the volcano. It is believed that worshiping Ganesh ji and offering fruits to the burning volcano prevents the eruption in it and if not done this community will end up burning.

Many methods of worship are similar to Hindus. Just like the priests of our temple here, there are priests here, who are called Resi Pujangga. They help people in completing the law. Later, the priest's son becomes a priest. The priest has three associates during the big celebration, known from Legen, Sepuh, and Dandan.

This tribe has its own calendar. Accordingly, during the 14-day festival every year, a big fair is organized on the mountain in which the local people show many types of art. This is the reason why this festival attracts foreign tourists too.

However, due to the continuously burning flame, the temperature here is high. For this reason, if a tourist has trouble breathing or any other type of health problem, then he is not allowed to come here.

The volcano site idol of Bhagwan Ganesh is the most satisfying picture on the internet in the current phase of the corona pandemic and only making taking a look at it we can have composition, spirituality, and well-being. Om Jai Shri Ganesha Namah