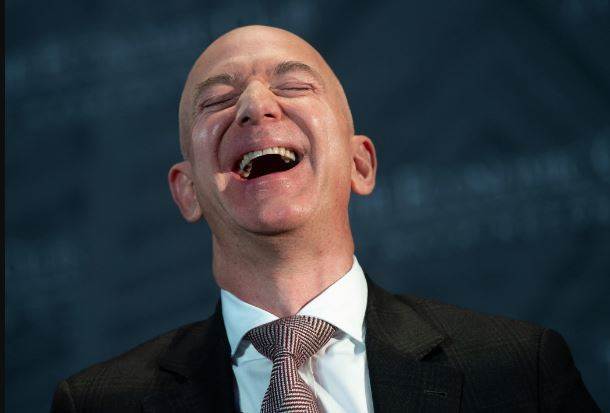 Jeff Bezos Is Now First Time $200 Billionaire, What About Poor ?

Amazon Supremo and Founder Jeff Bezos seem to be getting greedier than ever. After the divorce, he seems to have lost the focus of a sensible life and hence is putting in a lot of money which just seems to parallel with other rich millionaires. He does not even do charity as he does not care about the poor community. One thing is for sure that you do not care about yourself, Mr. Bezos.

'The rich get richer' is the tagline of people like Jeff Bezos who are just money minded humans. On Wednesday when his personal wealth had crossed the $200 billion mark then Bezos might be wondering, 'Nah, It should have been delivered earlier on.

The stock price of his e-commerce giant is now above $34,000 mark which is almost the all-time hit the mark and the US stock market is going gaga over it.

Due to the rally in tech stocks, we can see not only Bezos but also Elon Musk getting benefited from it. Having said that we can surely contrast between as Musk is far more innovative and creative than money minter Jeff Bezos can ever be. Amazon just fakes out corporate social responsibility and is indirectly funding the left lobby of Democrats.

READ HERE MORE : Benefits Of A2 Ghee For Our Health

Bernie Sanders who is himself did the propaganda of being an ultra-left and talking against Bezos as he does not invite him for free wine and garlic salad parties. That's Bernie's favorite food items, to be frank.

He tweeted, 'The fact that Jeff Bezos became the world's first $200 billion man at a time of unprecedented human pain and suffering is morally grotesque. No. Billionaires should not be allowed to make $800 billion during a pandemic.'

Now where does $200 to $800 billion comes into place is a matter of debate because the hippie culture-based left lobby of the USA cannot be taken seriously. Even whether it is the political class consisting of current US President Donald Trump who is also himself a billionaire or even Joe Biden who seems to be Mr. Clean but he does have a lot of wealth in his kitty so is even Mr.Bernie Sanders who does foul cry for poor and deprived classes of the society but does not even donate a penny for them.

Only the richer tax wealth in the US can stop these anti-poor rich people from amassing more money. It is not a mere surprise that people do not want to talk on it as they know nothing can be done but sooner or later they would realize something needed to be done.