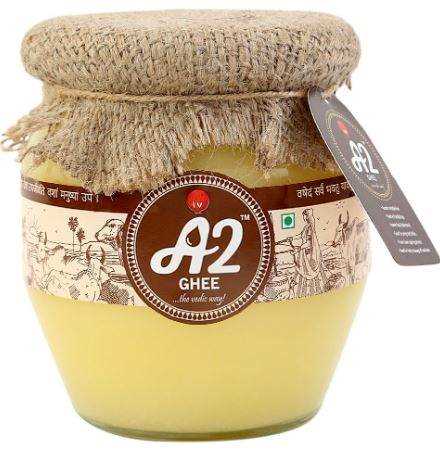 Benefits Of A2 Ghee For Our Health

At the same time, Holstein cow milk imported from Europe contains A1 protein. Most of the commercially produced milk and milk products contain A1 beta-casein.

But country cows are special because A2 beta-casein protein is found in their milk. The interesting thing is that A2 is the basic beta-casein protein found in cow's milk. Around 8000 years ago, a mutation is believed to have occurred, under which two types of beta-casein were found in milk produced by different species of cows.

We can say that A2 organic milk revolution is coming nowadays. Demand for A2 ghee, butter, milk and buttermilk packaged in organic stores, specialized websites and large-scale fairs is increasing rapidly.

The number of such forms has increased, where native cows are reared. These local forms are small and also expensive. (Think 500 grams of ghee costs more than 1800 rupees).

In Ayurveda, many diseases are treated with the help of herbs. It helps in strengthening the immune system of the body for centuries. Similarly, A-2 ghee is made from the highest quality A-2 milk of cows.

Traditionally, Ghee is prepared with the nutrient-preserving Bilona churning process. This is why ghee is considered very beneficial and healthy for the body. It is seen as a superfood for Indians, which works to protect people from many serious and seasonal diseases. It also strengthens the immune system.

READ HERE MORE : Who Was Jacob Blake ? Whose Murder Has Put US On Fire

Ayurveda is an ancient medical science which helps in curing many diseases. According to Ayurveda, desi ghee should be consumed on an empty stomach as it provides many benefits. Let us tell you that in Ayurveda it is believed that ghee can be used to rejuvenate one's body and it can make anyone healthy. Along with this, by regularly consuming ghee, it works by nourishing all the cells present in the body properly and keeping them healthy.

A-2 ghee contains a lot of amino acids. Along with this, ghee can also be consumed to overcome the deficiency of Vitamin B2, B12, B6, C, E and K. Omega-3 and omega-6 fatty acids are also present in large amounts in A-2 Ghee.

Omega-3 and 6 are known to eliminate neurological problems in growing children as well as reduce the risk of ADHD and other behavioral problems. Apart from this, its intake also works to control the blood pressure and cholesterol levels in the body.

Generally people are a little cautious about the consumption of ghee. It has been observed that some children do not like the taste of ghee at all. A-2 Ghee helps to increase brain functions. Improves strength and endurance.

Nourishes the nervous system and at the same time maintains the health of eyes and heart. The specialty in this is that it is beneficial for people of all ages, especially it is considered more beneficial for children.

We should promote Ayurveda above any other medicinal alternative. One thing is sure that If A2 ghee is consumed on a daily basis then our immunity will be increased and we will have a better survival rate against mental as well as physical ones.