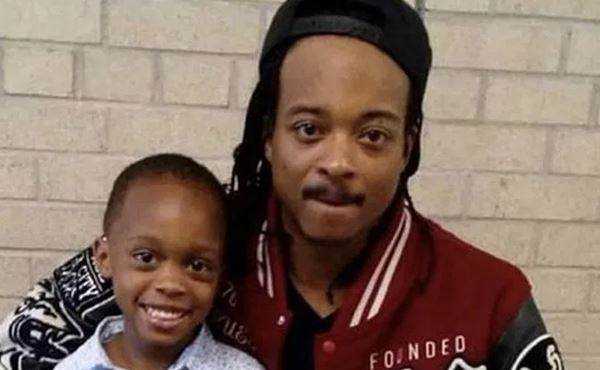 Who Was Jacob Blake ? Whose Murder Has Put US On Fire

Within a few months, the black matter has once again risen in the US. This time there are violent demonstrations in the state of Wisconsin. In fact, the police on Sunday shot a young man of black origin, Jacob Blake, due to which he is badly injured. Demonstrations are being held against this police violence against blacks. Know, what is the Jacob Blake case.

The shooting incident took place around 5 pm on Sunday 3 August, the video of which was posted online. This video clip is made from the other side of the road and shows a black man walking on the pavement towards the front of his car and opens the door on the driver's side only when the officer coming behind him taunts him. is. As soon as the person opens the door on the driver's side and bends inside, an officer grabs his shirt from behind and pulls it back and starts firing.

Racine White, the man who made the video, told CNN in an interview that he saw the police beating up a black man. That black Jacob was Blake. The police shot him a total of 7 bullets. White also said that he was listening to the police shouting that the knife had fallen down, although Jacob did not see any knife. Soon after being shot, the policemen took him to the hospital.

The emotional states of the family came for the first time two days after the incident. Jacob's father said that he was shot 7 times as if he was nothing. He is also a human and does mater.

According to Jacob's lawyer, due to the injuries, his small intestine and colon had to be removed, while the kidney, liver, and hands were badly injured. Presently, the doctors have not given any statement on whether he will be able to recover completely. The police officer who shot here has been sent on leave and the matter is under investigation.

Now they also know who Jacob Blake is, for which thousands of people are on the streets. Jacob was born in Evanston, a city outside Chicago. Later, he came to Kenosha along with his family for a good future.

This is the same city where this accident happened. Jacob's entire family is involved in social work. His grandfather used to be a pastor in the church. At the same time, he was also a part of the Civil Rights Movement. During this time he continued to oppose discrimination on the basis of race.

Jacob himself is also associated with many types of social service. According to a BBC report, he works for a charity called Black Urban Recycling. This charity collects and recycling aluminum bottles and performs community service.

After the incident, the court came to know that the sexual violence against Jacob, the crime of forcibly entering the house was an active arrest warrant. However, it is not clear whether the police was aware of it at the scene or not. According to police, he reached there with a domestic violence case

A case came in the US in May as well, leading to violent protests in more than 30 states. Even the heat of anger had spread across the world. This was the case of the death of black American citizen George Floyd in May due to police brutality.

In fact, black American citizen George Floyd died in police custody on May 25 in the city of Minneapolis, USA. Floyd was accused of paying through a fake bill. Because of this, a white police officer kneels on Floyd's neck and presses him.

It was seen in the video that the officer keeps George's neck pressed with his knee for at least eight minutes. During this time, George is seen saying that he has stopped breathing. The police officer does not remove his knee even when George stops moving and speaking. Floyd died shortly afterward.

In protest against Floyd's death, violent demonstrations began in many cities of the US in violation of curfew. In many states, protesters set fire to cars and buildings and entered shops, after which officers fired tear gas shells to overcome them.

The rioters set the police outpost in Minneapolis where Floyd was arrested. Due to the incident, violent demonstrations started taking place all over the world and even many great figures were accused of racism and their idols were broken.