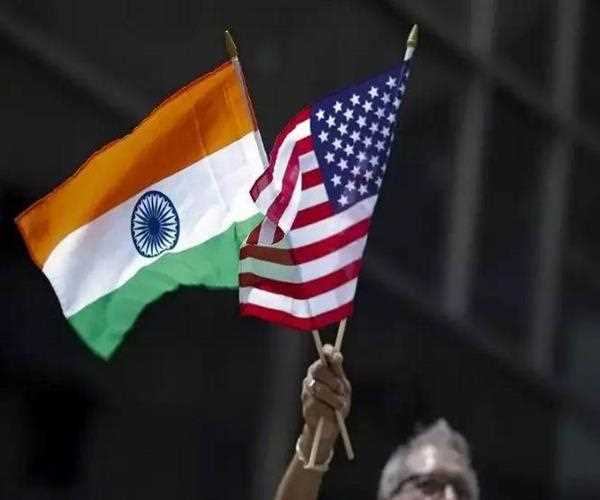 As the dates of the presidential election in the United States get closer, the two major parties are leaving no opportunity to secure their vote bank and make a dent in the other's votes.

Forecasts so far are currently overshadowing the Democratic Party's Joe Biden Republic candidate and current President Donald Trump. But it would not be right to rely on these estimates.

Four years ago Hillary Clinton also led the forecast, but the result was in Trump's favor. During these four years, India and Indians have emerged in important roles in American politics. Both sides are not giving up the opportunity to woo the Indians.

By the way, the first choice of most American Indians is the Democratic Party, as this party has been claiming to take care of blacks, minorities and people of Indian origin. But recently there was an omission from the candidate of this party, Joe Biden. Now they are working to make up for it.

In fact, Joe Biden released a vision document for American Muslims during his campaign. He angered most voters of Indian origin by criticizing the Indian Kashmir policy therein. Biden had said that the Government of India should take all such steps to restore the rights of the Kashmiris. He had said that decisions like banning peaceful protests, shutting down the internet and imposing other restrictions weaken the Republic. Biden did not stop here.

He also expressed disappointment over the NRC and the Citizenship Amendment Act in Assam. He was of the opinion that the decision taken by the Government of India about this frontier region is not in accordance with the secular tradition and constitution of the country.

The Democratic Party later realized its mistake. He tried to heal Kamal Harris on the injury of Indians by choosing Kamala Harris as his Vice President. The first presidential nominee included two women of Indian origin, Tulsi Gabbard and Kamala Herris. But the diplomatic craftsman of this party, Barack Obama, tested the American thinking that he avoided the election of a woman to this peak position of the country.

As such, Biden appeared. When Biden chose Kamala Harris for the second summit, he said in support, "I want a person who is smart, works hard and is ready to lead." Kamala is such a person. But this bet cannot be called very effective, because Kamala Harris herself has publicly criticized the current Kashmir policy of India many times.

On this basis, despite being a clean image and a skilled administrator, Kamla is said to be not getting the widespread support of Indians. After this, Biden also released a separate vision document for Indian Hindus, pointing to Pakistan that terrorist acts from across the border in India will not be tolerated. He also said that Indians should trust Kamala Harris and her. The role of Indians in economic reforms in America is very special.

Joe Biden also released a joint video message with Kamala Harris on Indian Independence Day, saying that the people of India can take the country forward with the help of America. He promised that the United States would stand with India at all times if they win in dealing with the threats that India is facing along the borders.

Trump did not hesitate to capitalize on the Democratic Party's error. In the New York Police program, he said that Joe Biden and Kamala Harris feel that the Indians are with them, but this is not true. Trump does not forget to miss the Houston rally in the area of ​​Indian voters.

However, on many occasions, his attitude towards India has been rude. One thing against Trump is that people of Indian origin in the US keep a distance from the Republican Party due to its racist behavior. However, Trump has never missed an opportunity to woo the vote bank of Indians since he became president. People from India, Pakistan, and Bangladesh still live together in America.

It is true that Joe Biden has made a mistake in the case of Kashmir, but his vision document for the people of India certainly makes up for it. The Democratic Party has protected the people of all religions in India, has given permission to the working people to have a family, come together against China, increase the visa number for jobs. India has promised to lift the ban on research students and enact strict laws to prevent racial discrimination.

Biden needs more if he gets the support of decisive votes to become the president of an educated nation. This time he can create history by defeating the ex-officio president. But right now they need to come closer to India.