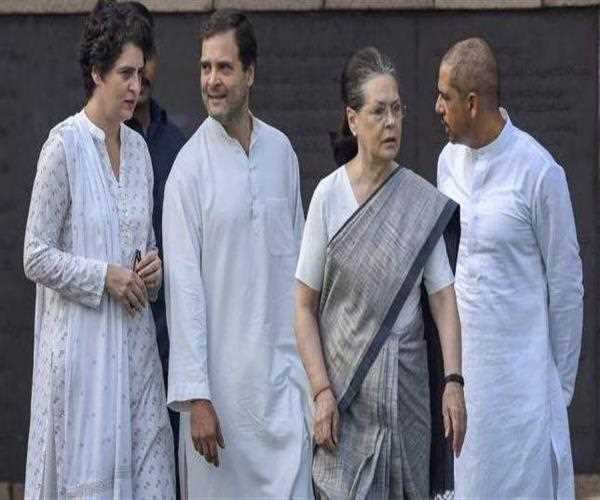 The message that came out after the Congress Working Committee meeting on Monday shows that Congress wants to maintain the status quo and that is its problem. Everything was absolutely anticipated. Under the same old formula, Executive Chairman Sonia Gandhi offered to resign.

The Congressmen then refused to accept him and persuaded him to continue in office. The entire party pledged its allegiance to the Gandhi family and there was talk of forming a committee. It was said that the party president would be considered in the session of the Congress Working Committee.

The truth is that whenever questions have arisen in front of Congress, the same has been done. People who have raised questions by writing letters have taken a big risk, because they can be marginalized.

This does not happen in Congress, but this time it has happened, then it should be understood that there is so much frustration among the party leaders. Ideally, the party should have welcomed it, but the entire discussion remained confined around the Gandhi family. Those who write letters do not intend to capture or break the party, they want to improve the party.

But the same message has come out of the working committee meeting that the status quo will remain. However, this letter has made a difference that Congress is moving towards a full-time president. But no time-limit has been set as to when this will happen. Congress is the largest opposition party in the country. The country currently faces major challenges.

The challenge of a strong leader like Narendra Modi is in front of Congress. Assembly elections are going to be held in many states. The outbreak of the Corona epidemic is wreaking havoc in the country and the state of the economy is worse. Innumerable people have lost their jobs.

During the lockdown, we saw the largest displacement after independence. China has seized our land on the border. Amidst such challenges, the country's largest opposition party does not have a full-time president.

In such a situation, if there is a voice from inside the party that we want a full-time president, then those who raise voices are made villains that they are helping the BJP. While everyone knows what is the condition of the party. In the working committee meeting, Sonia Gandhi has been authorized to form a committee that will help her and deal with these questions.

When that committee will be formed, who is going to be in it, nothing is decided yet. It is also not clear what the party will do against these 23 people who signed the letter. It should have been that the party leadership would call a group of senior, youth and letter writing leaders and say that you have given good suggestions. Let's sit and talk about how to do it next.

READ HERE MORE : Is It Right To Open Schools In Corona Pandemic ?

The time given for six months will, in fact, attempt to convince Rahul Gandhi during that time. And the way the voices were raised that if not Sonia, Rahul, then it is time to convince Rahul.

Sonia Gandhi would like Rahul to be re-crowned as president through a Congress session, because if she did not want to do so, only last year would have been another president. And if someone from outside the Gandhi family comes and gets the support of the Gandhi family, the party will have no problem accepting it.

The party will not accept and divide into two factions, when no one will get the support of Gandhi family. There is no dearth of experienced and talented leaders in the party. Sonia wants Rahul to take over the reins, but Rahul does not want to. He says that he should be allowed to work independently. This means that he wants his team apart from senior people. This can be done in three ways.

The indications are that this indicates that Rahul will be crowned again. In the situation of the country today, Rahul is speaking with great courage and strength. Prime Minister Narendra Modi is taking a dig at him. No other leader of the opposition is showing the same courage.

But he is not able to take the people of the country into confidence. Why the country is leaning towards Modi, it has to be seen. What needs to be changed for that, Congress and Rahul should think on this.

Today the people of the country are not advocates of politics of dynasticism. The youth should have come to Rahul, but they are going to Modi. It is clear that Rahul has failed to get the pulse of the country. The party will have to brainstorm on all this.

The BJP wants that the debate between Modi vs Rahul should go on. Many people of Congress are aware of this, even if no one is speaking. The underlying message of this letter is also the same. When they talk of collective leadership, they mean that people are well aware of Rahul's leadership. If Rahul becomes president, he will have to take everyone along.

Rahul is taking all the decisions, but not from the front, behind the scenes. Whereas people want them to take decisions with accountability. If Rahul wants to do it, he can do it. There is a need to openly discuss every issue within the party as to what we need to do, in which everyone can speak without saying anything.