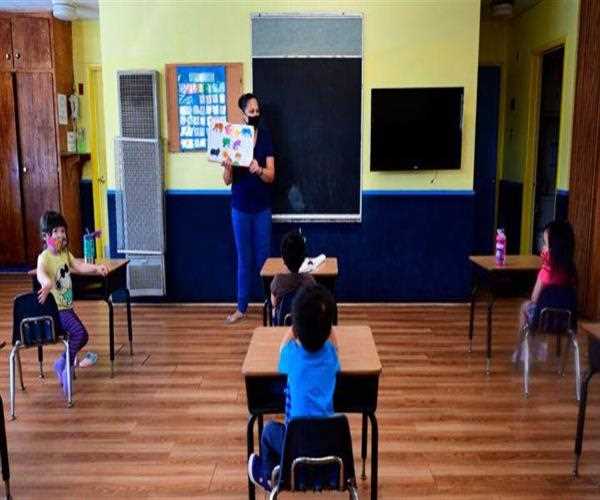 Is It Right To Open Schools In Corona Pandemic ?

Corona's global figure has gone above 20 million 38 million. Meanwhile, British Prime Minister Boris Johnson has talked about opening the school. Appealing to the parents, the PM said that sending children to school will bring positive change.

However, before this, US President Donald Trump has also pressured to open the school. Schools were also opened in some states but the result was worrying. Now Britain is also on this path. Know, is this the right time to open a school?

Schools have been closed in the UK for more than 5 months. Meanwhile, on Monday, PM told parents that keeping children away from school would be more dangerous than the virus. He said this by referring to the fact that the risk of corona in children is relatively low. In an appeal to parents to send children to school, Johnson also said that going to school will bring a good change in the children who are locked in their homes. It is believed that his appeal came after the plan to find a school from next month.

Public Health England (PHE) also conducted a study to weigh in on the matter of opening the school. The study, which took place between June 1 and July 31, included some schools in England that have opened with restrictions. The study showed 198 corona infection cases, including 70 children. That is, the fear of infection is less visible in children.

However, there is another side to this study. Children may be suffering from mild infection of corona, but in most cases they are very strong carriers of the virus. In such a situation, the parents or elders of the home fear the infection from the children who brought the corona from school. Infection can be dangerous, especially for older people or pre-ill people.

If we look at the case of America, the results of opening the school were quite frightening. Schools opened there amid restrictions in several states, including Mississippi, Tennessee and Georgia.

The school strength was around 25 to 30 percent. Children and staff were allowed inside only after checking the temperature. All the people were in masks and the sanitation was being followed as much as possible. Even after this, corona infection in children increased by 90% in 4 weeks. According to a report by CNN, the American Academy of Pediatrics did this study. Since then, experts are advising not to open schools.

In India, this danger is more because there is lack of facilities here. For example, if the government issues orders to open schools and parents also send children to schools, then hygiene will be a problem in most schools. For example, there will be many problems for washing hands or sanitation.

In view of this, UNICEF also did a study. Its report is quite frightening. According to this, almost 24 percent of the world's schools have neither water nor soap available for handwashing. While 19 percent of the schools have water but no soap facilities. That is, two out of every five schools in the world do not have soap washing facilities, which is very important to prevent corona.

The situation is worse in rural areas. In such a situation, if schools are opened, more than 80 crore children will be feared to be infected. This transition from children will go to the elders of the house. This could lead to the second phase of the epidemic before the vaccine is introduced.

By the way, it is also interesting to understand why governments are so eager to open schools despite the danger. Actually, this whole matter is being considered political.

Especially in the US, there is talk of opening schools in view of elections. Even Trump is talking about stopping funding for not opening schools. In his tweet, he wrote quoting several countries like Germany, Denmark, that schools have opened there and there is no problem.

Here the opposition party's Democrats want the school not to open before the elections in November. But it is important for children and their families. If this is not done then the funding can be stopped.

There is another reason for Trump's pressure to open schools. Even in the US, 30 million children depend to a large extent on school lunches. Let me tell you that in the US, the national school lunch program runs like India's mid-day meal.

This is having an impact, as well as many parents are not able to take care of children properly due to work or many other reasons. In such a situation, parents will also be able to get help along with children when school opens. However, despite all the precaution when the school opens, there is also the fear that the corona will grow faster.