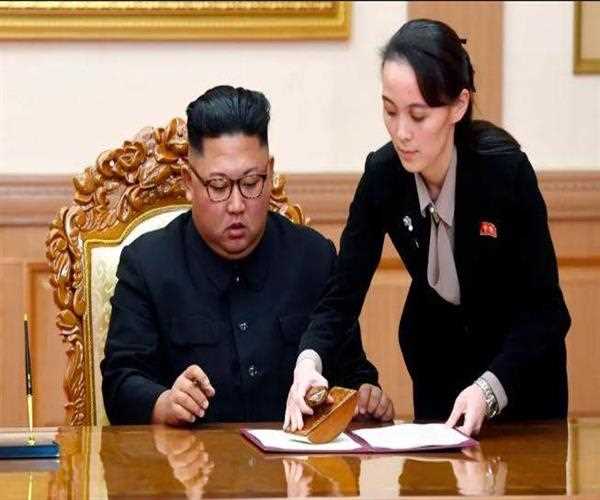 Kim Yo-jong (Kim yo Jong), the sister of North Korea leader Kim Jong Un, has recently received several important responsibilities. This claim has been made by the spy agencies of South Korea.

He says that although Kim still has a lot of power, to reduce the pressure on him, he has given a lot of responsibilities to his younger sister Yo Jong. It has also been announced in the National Assembly. Since then Yo Jong will officially oversee North Korea's international policy. Know who is Yo Jong, who is considered to be the powerful person at number two in the country.

Born on 26 September 1987, Kim Yo Jong is 4 years younger than the dictator of Korea. Yeo did senior secondary in North Korea and after that, she studied at Kim Il Sung Military University.

For further studies, she went to Bern, Switzerland, where she returned home after studying till 2000. It is said that she used to change her name during this period. However, there was a deep protective shield around him, which was forbidden to speak anything about Yo Jong.

Yo herself was confined to herself and could not become any special friend of hers. Yo Jong is believed to have done so because of North Korea's policy of being isolated. She even stayed away from student politics during the university period so that no one could pay attention to her for any reason.

The daughter of the dictator family, who is quite isolated from the media and the world, first appeared in 2010 at the Workers Party of Korea Convention with her father. About 3 years later, she appeared on the occasion of her father's funeral. But his real political activism started from the year 2014. It is believed that she started helping her brother as a politician.

According to the information, Yo Jong, who had equal rights over English and German language in addition to the local language, married the son of his own party secretary Choe Yong-hee who died in an accident about 5 years ago. Since then, Yo Jong started appearing in politics in North Korea.

Recently, he was made an alternate member of Politburo, the largest decision-making organization in the country. Jo Yong was removed from this post in April last year. Failure of talks with President Donald Trump in Hanoi was said to be the major reason behind this. The dictator Kim himself had dismissed his sister from this post as punishment.

Yo Jong led his country during the Pyeongchang Olympics in 2018. After this, his stature in the ruling party steadily increased, which was shown to decrease once after the punishment of last year. However, now after Kim's seriousness, it is believed that the task of taking command of the country may come to his sister.

Yo Jong, along with being the political advisor of his brother, also took important responsibility in his safety. Like during cigarettes in Singapore and Hanoi, when cigarette enthusiasts used to collect the finished cigarette butt in the ash tray, Yo Jong used to collect it himself. She believed that if her brother's DNA sample was found in the hands of any country or agency, she could be harmed. Even the bouquets found during the talks, she used to take before the brother's hand.

It is believed that Yo Jong's 2 offices have a lot of interference, where hard cash is accumulated for family and country due to wrong actions. Those offices are known as Offices 38 & 39, although they do not get any confirmed information, it is said that the cash that came from things like cyber theft, smuggling is kept here.

Yo Jong is the first Vice Director of the Propaganda and Agitation Department. Kim Yo Jong is believed to be the brain behind Kim Jong Un's public image abroad and inside North Korea.

Yo Jong gave the first statement with his real name under this post. It was clear from this that not only behind the scenes but Yo Jong has also come to power with his brother. Recently he declined the offer of US President Trump's help on Coronavirus with the same post.

Yo Jong placed his first military order at the end of last year. According to DailyNK, she also handles the women's unit of the North Korean Army. Yo Jong, in his order, asked women soldiers to pay attention to the physical changes happening during work in the worksite.

It is believed that his role in the Politburo was somewhat weakened after North Korea's Hanoi summit with the US failed in 2019.

However, in the year 2020, during the speculation of Kim Jong Un's alleged illness, Yo Jong appeared again as a powerful leader. Now among the new responsibilities, he has also got the responsibility to make better relations with America and South Korea.