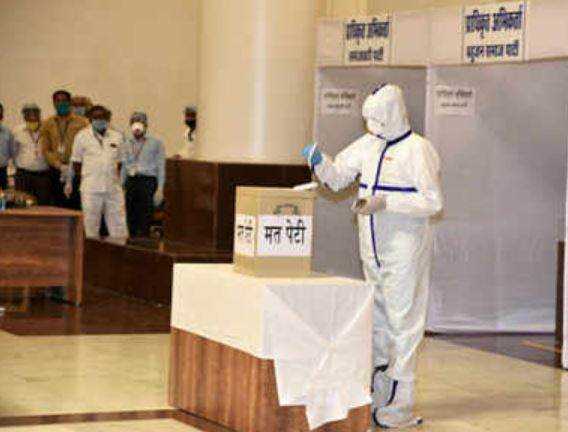 The Election Commission on Friday issued new guidelines for conducting elections in the Corona era. Bihar is the first state to have assembly elections during Corona. By-elections in Madhya Pradesh and other states will also be held simultaneously.

If these elections were held at the expected time and in accordance with these guidelines, it would definitely prove to be a completely new electoral experience for voters and political parties.

The Election Commission has made it clear in its guidelines that no more than two people will be present with any candidate at the time of nomination. A group of not more than five people can do the house-to-house ministry.

Roadshows cannot have more than five vehicles. Voters have also been instructed to give gloves during voting and to make special arrangements for Corona-infected voters. Clearly, all these instructions are important and necessary to mitigate the dangers of conducting elections during Corona. But there is no mention of virtual rallies in these instructions, which have already been tried in Bihar.

It is possible that the Election Commission will say something about this separately. But for the time being, it is necessary to underline his lack of say because several parties, including the main opposition party RJD in Bihar, in the suggestions given to the Election

Commission, said virtual rallies against the level playing field. It is natural for the opposition to get less space on a wider media medium like TV, so most opposition parties in Bihar are opposing the election in the state amid this havoc by Corona.

One can say that the Presidential elections in America are going to be held in the same period, whereas there is more outbreaks of Corona there than in Bihar. But on the one hand, direct publicity in the US presidential election is less and TV and other media are not able to be unilateral, secondly, it is a constitutional obligation to hold elections there on time. There is no such obligation in our country about assembly elections. A simple alternative to a few months of the presidential rule is also available.

The second aspect of this is that no such time limit can be tied, after which the corona disease is expected to end. In such a situation, the question is justified that when the decision is being taken to take risks in every sphere of life, why should elections be postponed indefinitely, the biggest celebration of democracy.

The decision is ultimate to be taken by the Election Commission itself and it will do this after thoroughly considering all the parties concerned. But it would be better to once again consult all political parties before announcing the dates. It is important that the decisions and arrangements of the Election Commission are not only fair, but political parties and voters also have confidence in them to be fair.