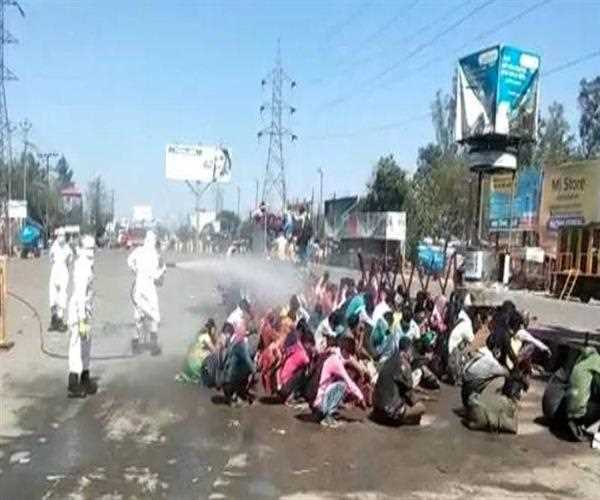 It seems that the corona period has become a period of experimentation for all the modern methods of human disease that have been learned by the advancement of medical science. For the last about six months, every second-third week, the news of some effective drug against Covid-19 comes in the market.

There is no shortage of experiments and claims going on all over the world regarding its vaccine. The matter was limited so far, but no human being caught in the corona, countless precautions and measures are being tried.

More than the precautions to wear masks, maintain physical distance and wash hands, these precautionary measures have reached to clean fruits - vegetables, clothes and even themselves with poisonous chemicals without knowing if there will be any far-reaching side effects.

Hundreds of hand sanitizers and deadly chemicals such as sodium hypochlorite are being bombarded to disinfect homes, neighborhoods, roads, shops, etc. in such a way that corona remains should not be left in any corner.

The World Health Organization has warned that roads, pavements, shops are not shelters of the coronavirus. In such a situation, before chemical spraying, all aspects should be considered.

But it seems that civilization is stuck in a kind of maelstrom. Therefore, as a precaution, in almost every city of the world, many other disinfecting chemicals including street alley sodium hypochlorite are being sprayed with the help of heavy spray. Various machines were installed in this work. In India too, such spraying was done on roads, streets, cars, shop shutters.

In the early days of Corona, the administration there in Bareilly in Uttar Pradesh had sprayed sodium hypochlorite chemical on laborers from elsewhere, which worsened the condition of many workers and had to be hospitalized.

Apart from this, care has been taken to sanitize almost all places with a spray of sodium hypochlorite wherever government and private offices were opened during this period. But does this chemical bombardment actually eradicate the virus? Is it just a mere consolation?

It is clear from the latest instructions of the World Health Organization that this type of spraying has given people nothing but a false comfort because most of the surfaces on which it is being sprayed do not have a coronavirus. But such chemical spills can have other harmful effects, which have emerged as the biggest difficulty for human civilization. Talking only about the dangers of sodium hypochlorite, direct exposure to this chemical that has the property of bleaching proves fatal to humans.

Many scientists have clearly stated that the risk of indiscriminate use of antibacterial chemicals, used in hand sanitizers, sprays, and other methods of cleaning, is that viruses and bacteria will develop immunity against them. This will not only happen in the case of the coronavirus but other viruses that are disturbed by humans, it is possible that they will also develop this resistant force.

So, if the bombing of chemicals keeps the corona on hold for the moment, but then another virus may attack us with more power than before. In such a situation, we can be completely destitute, because we must have emptied the quiver full of chemical attack arrows.

Medical scientists call such antibacterial weapons as antimicrobials, which include antibiotics, antiprotozoal, antiviral and antifungal drugs, and sprays. Of course, all these are very important in the care of our health because they give us strong armor against infections that weaken the immune system. But many types of research have proved that some bacteria and viruses acquire the power of mutations (mutations) against all these antimicrobials after a time or change their appearance. Both these conditions make our war with diseases weak, because in such a situation any infection easily picks up speed and becomes more destructive than before.

Their crisis is even bigger. Many well-known toxicologists in the world are saying that simple chemicals like hydrogen peroxide and phenyl have the power to transform our DNA.

From this perspective, such chemicals are called genotoxic agents. Usually, minor damage to DNA is replenished after some time, but DNA loses its ability to replenish itself when exposed to chemicals. When the DNA damage is disrupted, our cells start to rapidly destroy and we start to suffer from many other serious diseases.

When a study was done in the US, it was found that in the last five decades there has been a huge increase in the use of antibacterial chemicals in plastics, construction materials, pesticides, furniture, food packaging, textiles, and all products.

In the same period, there has been a manifold increase in obesity, diabetes, liver, kidney, and heart diseases. It is a fact that the fight against the dreaded bacteria and merciless viruses has been handed over to the chemicals so much that we humans have become dependent on some deadly chemicals at every turn. There are innumerable examples in everyday life, which show that in the name of advancement of science, we have been enslaved by such chemicals, which are doing us harm rather than profit and we are not even realizing it.

In the past, extensive spraying of chemicals was done to prevent the outbreak of Coronavirus. While its effects cannot be minimized by spraying chemicals, because the matter would have been so straightforward, the World Health Organization would not have to issue a warning that chemical spraying on various surfaces might not guarantee the elimination of corona, But it is much more likely to be in danger of human health. The dangers of chemical spraying should not be overlooked.