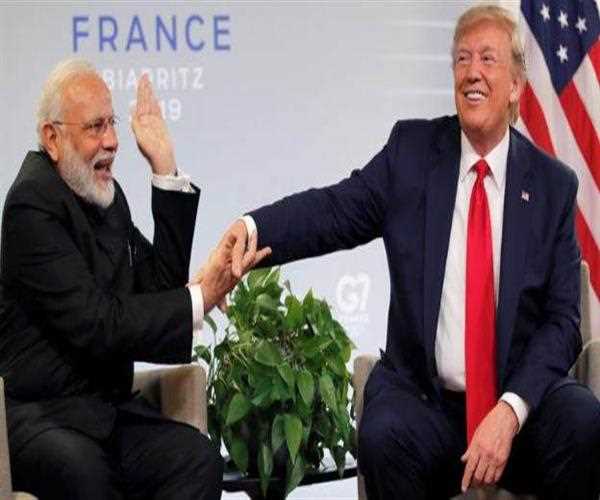 USA- India Relations 2020 Are At Stake

Despite serious differences on some key issues, the Indo-US relationship is at its best and has gone beyond belief. Facing humiliating defeats from China, in November 1962, when Nehru requested US President John F. Kennedy for strategic cooperation, including 12 squads of supersonic fighter jets and two squads of B-47 bomber aircraft, he called on Pakistan's President Ayub. The pressure was put on Khan not to take advantage of India's difficulties and not open a front in Kashmir.

It is likely that India would have got the support of the US and Britain, and the two-nation stand that would have played a role in the Indian side's announcement of a unilateral ceasefire on November 21, 1962. This important strategic and military cooperation of 58 years ago between India and America can be remembered today.

However, in 1971, when India was facing unforeseen pressure from more than one crore refugees from East Pakistan, US President Richard Nixon shamelessly supported Pakistani military dictator Yahya Khan in the Bay of Bengal to threaten India The seventh fleet was dispatched. After the first nuclear test in May 1974, the US imposed stringent restrictions on India.

In March 2000, Bill Clinton was the first American Democrat President to visit India after a 22-year hiatus and began a process that was later termed as a natural partnership by Atal Bihari Vajpayee.

The bold and historic civil nuclear deal was signed in 2005 during the tenures of Republican President George W. Bush and Indian Prime Minister Manmohan Singh, the biggest milestone between the two countries.

Bilateral trade in goods and services has reached $ 143 billion by 2018, making the US the largest trading partner. But despite serious negotiations, the two countries have failed to reach a trade agreement. President Trump withdrew GSP status from India and imposed punitive duties on many Indian products.

In the words of the US State Department, 'America and India have shared an interest in promoting global security, stability, and economic prosperity through trade, investment, and connectivity.

The US supports India's emergence as a leading global power and considers it an important partner in ensuring that the Asia-Pacific is an area of ​​peace, stability, and growing prosperity. '

Between May and August 2020, there is constant tension along the Line of Actual Control between India and China. The US has been very honest in blaming China for border aggression.

At a recent press conference, US Secretary of State Mike Pompeo made it clear that 'the Chinese military has increased border tensions with India: the Chinese took incredibly aggressive action. Indians have tried their best to react to it.

Many analysts believe the poor Sino-US relationship, Trump's tariff war, which devastated the Chinese economy, open accusations against China for spreading Covid-19, a ban on Chinese tech giant Huawei for cyber espionage and Events such as the US banning several key Hong Kong officials for human rights in China, closing the Chinese consulate in Hutson and closing the US consulate in Chengdu have all contributed to the deepening of the Indo-US relationship.

However, in the IAFA discussion, Carnegie-based Tata Chair of Assale Telles clearly stated that the main problem America has with China is that India is just a tool for President Trump.

According to former National Security Advisor Shivshankar Menon, 'Since Trump took office, Washington's relationship with New Delhi has strengthened. Indo-US defense and intelligence cooperation have reached a new height and both countries have worked on maritime security in new agreements.

Joe Biden looks unbeatable by choosing Kamala Harris as the vice-presidential candidate. Although the number of Indian-American voters is only one million, both Trump and Biden are trying to woo them, as they can make a difference in major provinces. The Biden-Harris duo's prospects are causing some concerns in India.

Harris has been critical of the repeal of Article 370, the reorganization of Jammu and Kashmir and the Union Territory of Ladakh, the Citizenship Amendment Act, the status of minorities, and India's human rights record.

Biden also expressed concern over some of these things. But he clearly stated that if he is elected president, he will stand with India facing threats on the border and improve H-1B visas and work towards abolishing the green card quota, about which Indians And there is concern among Indian-Americans.

It is hoped that if they are elected, America's broad interests in the face of the Chinese threat will make Biden-Harris realize the importance of India and carry forward the bilateral relations built by his predecessors.