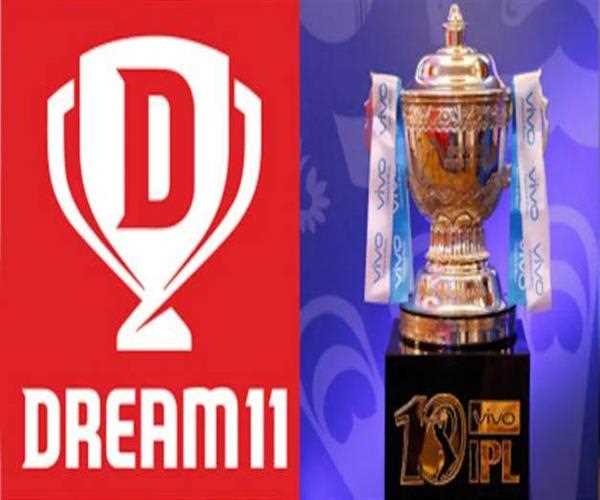 The sponsor of the IPL 2020 has been announced and this time Dream 11 has replaced Vivo. Although the contract of BCCI for IPL with Vivo was also upfront, but only for this year Vivo and BCCI have announced that it is being stopped for one year.

There are many types of discussions about Dream 11 on social media. Some people are tweeting that China has invested in this company. Let us tell you that this is a company from India and both its founders are also from India.

This company has many investors, one of which is also a tensant from China. It is being told that 10% stake in Dream 11 is with Tencent.

However, let's know about Dream 11. How this company became popular through the gaming app and now it will also be known as a sponsor of the IPL. Dream 11's parent company is Sporta Technologies Private Limited, which is registered in Mumbai.

Dream 11 is a Mumbai based sports app available for Android and iOS. The app is 106MB and its downloads are in crores. It is worth noting that Chinese company Tencent is also invested in Dream 11.

In 2008, Harsh Jain and Bhavit Seth started Dream 11. Both of them are childhood friends and are also fond of sports. Along with IPL 2008, he thought of Dream 11, because there was no popular app for such fantasy league in India then.

From 2012, the Dream 11 Fantasy League began to become popular in India and the company marketed it fiercely. After this, it became increasingly popular in cricket fans and the app was downloaded a lot.

By 2014, the company had 1 million registered users, while in 2016 this figure increased to double. After this, the users of this app increased continuously and after two years i.e. in 2018, Dream 11 has grown to 4 million users.

READ HERE MORE : Everything Related To What Is Surrogacy

In 2018, Dream 11 also became a partner in the official ICC Fantasy League along with ICC. Apart from this, along with Pro Kabaddi League and International Hockey Federation, the company has also done strategic parking.

In 2018 itself, Dream 11 made Mahendra Singh Dhoni it's brand ambassador and started the Dhoni campaign with the mind. As soon as Dhoni became the brand ambassador, this app started getting more downloads.

In the 2019 IPL, Dream 11 partnered with seven cricketers. Not only this, in the last year's IPL, but this company has also done a multi-channel marketing campaign with seven franchises.

We interacted with some users playing Dream 11 and they told about the use of this app. The Dream 11 app features games like cricket, football, basketball and kabaddi around the world. Scores go live in this app, but for this up to 50 rupees have to be charged.

After clicking on any match, you will see the prize pool here. Entry fees have to be paid to enter the contest. After this you can create a team by yourself.

After selecting the team, according to the performance in the actual match, users get points. The reward of millions can be won if you are at the top in the contest. It has a pool prize of up to 50 lakhs or crores.

It gets money according to the rank. There is a simple formula, the chances of winning are as many good points. How your player is performing is the most important thing to win.