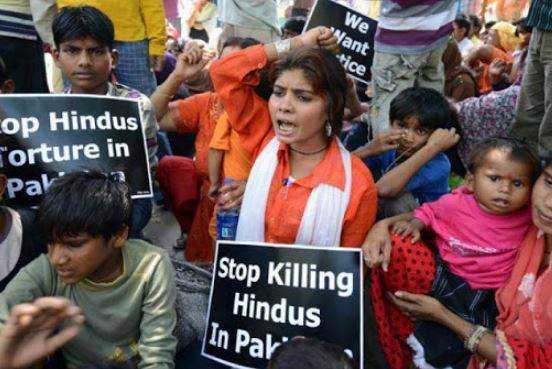 Sooner or Later Pakistan Is Going To Be Without Hindus

In the 1970s their number there was close to two lakhs. The Indian government is also trying to bring the remaining Sikhs and Hindus to Afghanistan. With his arrival in India, the land of Afghanistan will be completely empty of Hindus and Sikhs.

US lawmakers have proposed a proposal that these remaining Hindus and Sikhs of Afghanistan be given asylum in the US under the USRA program to provide relief to refugees. If this happens, it will be a similar initiative as the Government of India has done under the CAA.

Apart from this program, the US also has another law to provide relief to the oppressed people of other countries, which is called the Lautenberg Act. It was built in 1989 to facilitate the then Soviet Union's Jews to settle in America. Later non-Muslims of Iran were also included in it.

In America, the question has never arisen that how can a law to give asylum to people of particular religion of certain countries be made? In contrast, a storm of protest was not only raised in India about the CAA, but it also brought about anarchy and hooliganism in its name.

This work was done on behalf of the leftists, liberals and those who described themselves as secular or human rights. These elements tricked Indian Muslims against the CAA by saying that their citizenship would be taken away by this, while this law had nothing to do with any Indian.

These are elements that are deeply concerned about human rights, but never hear anything about the minorities of Pakistan, Bangladesh or Afghanistan. If something is heard, it is increasing difficulties for the minorities and especially for the Muslims in India.

These are the same people who have started to prove that India has made a move towards becoming a Hindu nation as soon as the initiative of building Ram temple in Ayodhya goes ahead. The only goal of this propaganda is to increase the feeling of insecurity in the minds of Indian Muslims.

It is understandable that there is no point in hearing anything from the government about the Hindus and Sikhs who are on the verge of extinction in Afghanistan because they cannot protect them even if they want to, but what is the reason that India's alleged Liberals and human rights do not consider it necessary to say the persecution of the oppressed minorities in Pakistan, especially Hindus and Sikhs?

Although all minorities live in Pakistan, there is a lot of havoc on Hindus and Sikhs. There is hardly any day when there is no news of kidnapping a Hindu or Sikh girl from there and then forcibly making her a Muslim by hurrying.

Hindus in Sindh had to convert to Islam to get employment. A program was duly organized for their mass conversion. Generally, such news is limited to social media.

They neither find importance in Pakistani media nor in Indian media. It is a fact that after the destruction of the foundation of the Hindu temple in Islamabad was destroyed, there is no discussion of whether there is any appearance of the construction of this temple.

Of course, there is a section in Pakistan that raises its voice for the rights of its minorities, but one is a very small section and the other is limited in its ability. There is a danger in front of people of this section that they should not be targeted for criticizing religious organizations and the governance and administration ready to appear helpless. Many such Pakistanis have been forced to leave Pakistan. Among them are those who have become atheists.

It is true that the situation of the minorities in Pakistan does not seem to be improving, but what does it mean that it should be denied to raise their voice in the same way as a few days ago a Nepalese organization demonstrated in front of the Pakistani Embassy in Kathmandu .

Whenever a question is raised about the dwindling Hindu population in Pakistan, it is heard from Pakistanis that in fact, they had more population in East Pakistan, whereas there is the truth of Bangladesh that there is an 8 percent population of Hindus there. Their number in Pakistan is less than 2 percent.

At the time of Partition, the population of Hindus and Sikhs in Pakistan was close to 22 percent. This means that more than half of the Hindu population disappeared.

This happened in front of our eyes and yet we do not refuse to face this truth, but also refrain from discussing it with the fear that mischievous secular hamlets should not be labeled as communal. Perhaps this is the reason why the proposal regarding the Hindus and Sikhs of Afghanistan did not come in the Parliament of India. Soon or later Pakistan is going to be without Hindus.