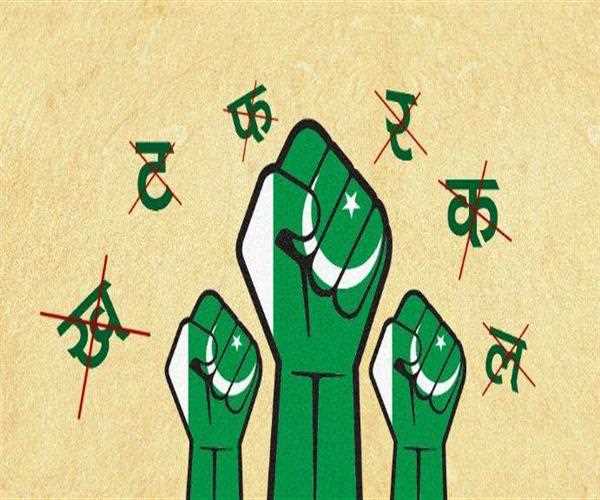 Hindi Language In Pakistan Is Getting Killed

What is the state of the Hindi language in Pakistan today? This is a tough question to ask but must seek the answers for it. What we are about to learn is really shocking but the reality is the Hindi Language is getting killed in Pakistan.

Dozens of Hindi writers including Yashpal, Bhishma Sahni, Krishna Sobti, Devendra Satyarthi, Upendranath Ashk, Narendra Kohli had learned Hindi or started their creations in schools and colleges in the current Punjab province of Pakistan before Partition.

Till 1947 many Hindi publications were active in Lahore, among which Rajpal & Sons was special. Many organizations were committed to the promotion and propagation of Hindi, the contribution of the Hindi Pracharini Sabha based in Dharmapuri is not forgotten. But on August 14, 1947, as soon as Pakistan came on the world map, the Hindi enemy's tongue became. Hindi publications ceased. Of course, Punjab was then dominated by Urdu and Punjabi.

But Hindi made a place for itself. From Lahore, Hindi newspapers under the names Arya Gajat, Prakash, and Amar Bharat were being published, which had a circulation of thousands. After the partition, Hindi classes ended up in schools and colleges there.

Varna Lahore Government College, Foreman Christian College, Khalsa College, Dayal Singh College, DAV, etc., had the provision of studying up to the postgraduate level in Hindi. Hindi was also being taught in DAV and Gordon College in Rawalpindi, Punjab.

Balraj Sahni, Bhishma Sahni, and Anand Bakshi knew Hindi only by staying there. Karachi, Balochistan, the capital of Sindh, and the remaining parts of Pakistan were also being taught in Hindi.

The Hindi department of Karachi University was also very prosperous. It is beyond comprehension why the in-depth study has not yet been done on the campaign to end Hindi with the creation of Pakistan? Government policy regarding language in Pakistan has been very irrational from the beginning.

Yes, Urdu got the status of the national language, which was not the language of the soil. This led to a big loss for Pakistan. The ignorance of East Bengal (now Bangladesh) on the question of language was the main reason for Pakistan to be torn apart.

Now there is a movement in Punjab province on the question of ignoring Punjabi. There is a prohibition on dialogue in Punjabi even up to the Punjab Legislative Assembly.

Despite making all the stops in Pakistan to allow Hindi to flourish, it is making a place for itself. Due to Hindi films and Indian TV serials, dozens of Hindi words have joined the common colloquial gait of common Pakistani. Now in his tongue, date of birth, land, dispute, unbreakable, trust,

Due to this, they learn many words from Hindi. Due to the desire to know Indian society and culture more deeply, many Pakistanis are learning Hindi through Internet. Sindh province and its capital Karachi have a fair population of Hindus.

However, Hindi is not the mother tongue of the Hindus of Pakistan and there is no system of teaching Hindi there. Despite this, he has an emotional connection with Hindi, and especially middle-class Hindus learn Hindi. They have a desire to read their scriptures in Hindi.

Hindus living in Sindh and Karachi are studying Hindi through Sindhi. For the past few years, Hindi classes have started at the National University of Modern Language (NUML), Islamabad.

These diploma courses in Hindi to Ph.D. And there are a total of five m professors. But only students of counting take admission in it. Obviously, there may be sporadic efforts towards Hindi in Pakistan, but there Hindi can no longer come to the former position.