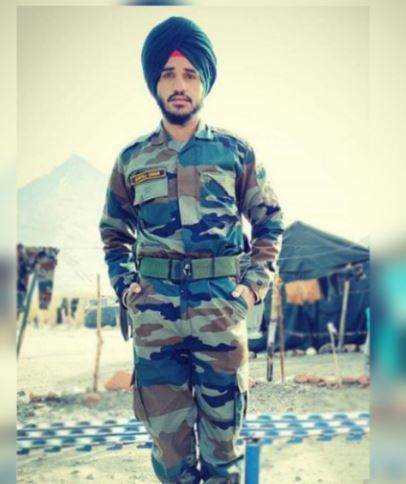 Story of Gurtej Singh : This is a story of a 23-year-old Indian Army young man whose example of bravery will force you to bow before his sacrifice and will spontaneously emerge from your mouth - oh martyr! I bow down to you.

On the dark night of 15 June, when the Chinese army fraudulently attacked the Indian soldiers who were patrolling, the 23-year-old Sikh champion or the ultimate soldier was part of the 'deadly platoon' of the 3rd Punjab Regiment, which belonged to Mother India The Chinese soldiers who had tricked inside were sent to help the soldiers who were driven out.

According to information received from Indian Army sources, the Chinese intruders had attacked Gurtej in a bad way, but this true son of Punjab land immediately picked up two Chinese soldiers and slammed them into the ground and the other two who came to help them When the Chinese soldiers wanted to bring him down, he pushed them all alone and dropped them into the ditch.

But in this effort, the balance of martyr Gurtej Singh also deteriorated and he also slipped. While falling he got stuck in a big stone due to which he did not fall into the bottom. Despite suffering a lot of wounds and bruises on the head, this lionheart soldier stabbed himself, re-tied his turban and pulled himself up again where his companions were fighting a number of Chinese intruders.

He took out his short kirpan and started attacking the Chinese intruders until a Chinese weapon came into his hand. After snatching that weapon, the Chinese could not stand in front of the terrible form of bravery this Khalsa showed.

Seeing this, Gurtej Singh showed the path of Yamalok to seven enemies. He had suffered many wounds and in the meantime, a Chinese fraudulently stabbed a dagger in his back. But this son of Maa Bharati, while dying, killed that enemy with his carpenter.

In this way, this martyr who sacrificed his life on the border of his country set an example of bravery and killed 12 Chinese. Finally, martyr Gurtej Singh placed his head in the lap of Mother India and slept forever in deep sleep.

In the last moments, the martyr would be saying the same on the lips of Gurtej Singh -

May the country be happy and free

What is ours, we are, we are not

I strongly advise every young kid, teenager or youngster to join Indian armed forced let it be any wing from Infantry, Navy to Air Force, Bharat Mata is calling us to serve for the nation for once and we shall be ready at any point of life to serve for the nation. My wish is to see many boys become like Gurtej Singh. My naman to the brave soul of this champion soldier!