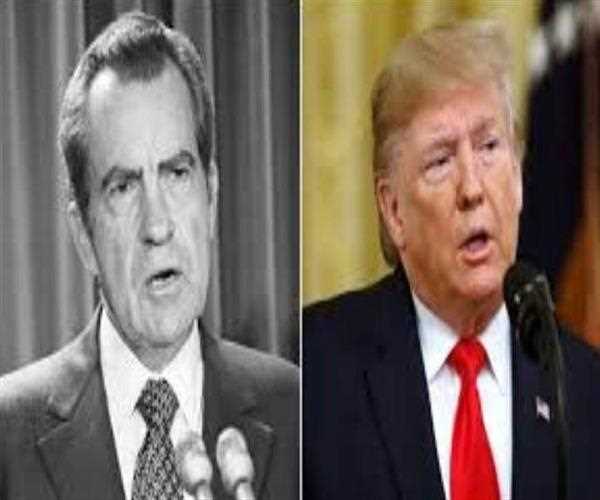 It is known as 'The Week that Changed the World' in America. The idea turned 49 this July, based on mistakes and idiots. On June 30, 1971, then US President Richard Nixon asked the US Ambassador to Taiwan to convince the Taiwanese government to continue with the alliance.

Along with this he also added that 'We do not do this with our friends'. The reference was to the forthcoming meeting between US National Security Advisor Henry Kissinger and Chinese Prime Minister Chow Enlai.

Ten days later Kissinger told Chow Enlai that 'we have finished patrolling (patrolling) in the Taiwan Strait, removed a squadron of air tankers from Taiwan and reduced our military advisory group by 20 percent.' By the end of July 1971, Kissinger and Nixon did the same thing diplomatically as throwing a friend under the bus. Taiwan withdrew from the United Nations by November 1971. A nation without membership on the world stage.

The wheel of time keeps spinning. Last week, US President Donald Trump sent US Health Minister Alex Azar to Taiwan to deliver a message to China. He is the first officer of such high status to travel to Taiwan in the last forty years. On Friday, Trump announced several measures to try to make China the main villain in his campaign to win re-election.

The US banned 11 Chinese officials and associates in Hong Kong, including Hong Kong chief executive Carrie Lam. Trump also passed an executive order prohibiting US companies and residents from doing any business with the Chinese-owned TicketLock and WeChat apps.

The hypothesis, formulated by Nixon and edited by Kissinger, was intended to separate China from the Soviet Union-led communist camp. The fact is that this camp was united only because of fear. China's biggest fear was disintegration.

Nixon conceived the idea in 1967 when, as a presidential candidate, he stated in an article, 'We cannot afford to leave China forever outside the family of nations, allowing it to spread its imagination And started nurturing haters and threatening our neighbors. ' Nearly half a century later, the US is accusing China of interfering in its elections.

US Secretary of State Mike Pompeo admits that "Xi Jinping is a true believer of a bankrupt totalitarian ideology and enjoys supremacy." The biggest irony is that National Security Advisor Robert C. O'Brien states that 'Chinese President Xi Jinping sees himself as the successor to Joseph Stalin'.

Most notable in this story is the narrative used by Nixon and his colleagues. The world's oldest democracy, standing on the principles of 'life, liberty and the pursuit of happiness', with the help of Pakistan's military dictator Yahya Khan and Romania's notorious dictator Nikolai Ceauूescu, China (a totalitarian country, which collectively oversees Mao's collective surveillance, repression and human rights Is notorious for violations) embraced.

Indo-American relations are subject to contextual inertia. The American establishment often referred to India's relations with the Soviet Union. What he does not understand is that the US-Chinese proximity pushed India towards the Soviet Friendship Treaty.

Alexei Kosygin offered the treaty in September 1969, but Indira Gandhi deferred it until August 9, 1971, when Kissinger outlined the new Troika and Nixon's shameless prejudice. For five decades, the US promoted China, started trade with it, and even got it into the World Trade Organization.

Chinese exports to the US were $ 3.5 billion in 1985, which increased to $ 557 billion in 2019. As a world factory, it claims $ 25 trillion in exports and $ 150 trillion in GDP. Despite all the threats by the American rulers about human rights and democracy, their own companies have created a sugar wall between the motive of profit and politics.

Meanwhile, China leveraged its economic strength for its ambitions. How China did this can be better analyzed by a live event, which was questioned by Hollywood star Leonardo DiCaprio and other wildlife enthusiasts.

Every year, Chinese tourists hunt endangered species of sharks from the Galápagos Islands. Technically these islands are within the sea of ​​Ecuador. Chinese ships use fodder to bring endangered sharks from Ecuadorian seas into international waters and capture and sell these sharks to China and elsewhere.

The unique bipartisan awareness in the Trump era stems from rising debt, deficit and inequality, and it is because of this that job and development have been hijacked. The US exported its savings, investment, technology and jobs due to its engagement with China.

The US is now trying new alliances - even with companies that can supply 5G technology, help with its supply chain of products and investment. The new maritime security partnership with India is part of the US new axis strategy. India will have to choose a suitable strategy for this. It is true that the current context is important for policy and politics. Likewise, heritage and history. Nearly half a century later Trump may say 'sugar less', but getting rid of wrong opportunism will not be easy. The road to redemption is long and difficult.