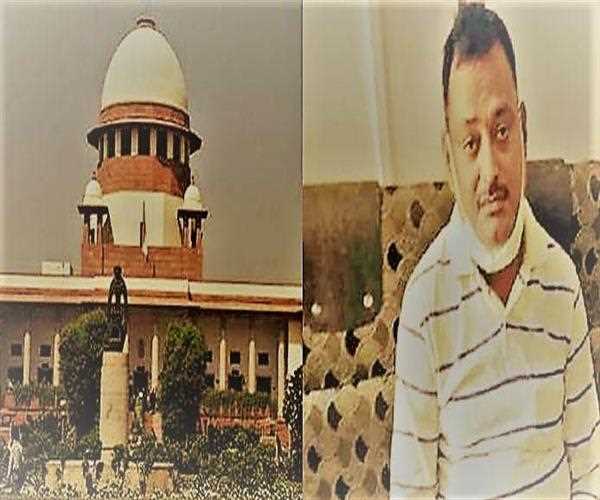 The Supreme Court rejected the demand for replacement of a member of the Commission constituted to investigate the cases of the killing of eight policemen at the hands of the dreaded criminal Vikas Dubey and then himself becoming a victim of Vikas and his police encounter.

A few days ago this commission was formed afresh on the initiative of the Supreme Court. Earlier, a very sensational case was encountered in Telangana in which a woman doctor was murdered after the rape and her body was burnt. This incident hit the collective consciousness of society and caused widespread anger among the public.

The criminals, who were taken to the scene in connection with the investigation, were killed in a police encounter. The state government constituted a special investigation team under the direction of the Hyderabad Police Commissioner to investigate the matter.

Revenue Section Officer and SDM, Shadnagar under the Magistrate's Investigation under Section 176 of Criminal Procedure Code, 1973 also investigated the matter. Despite a PIL pending before the Telangana High Court in this case, the Supreme Court constituted an inquiry team under the Commission of Inquiry Act, 1972.

This team was formed under the leadership of a retired Supreme Court judge, who gets a remuneration of Rs 1.5 lakh per hearing. It also includes a former High Court judge and two other members as former CBI directors, who are paid Rs 1 lakh per hearing.

Not only this, but they have also been provided with a security facility by the Central Industrial Security Force. Recently, the Supreme Court extended the tenure of this Commission for six months on the grounds that the investigation work was stuck due to the lockdown.

Remember, the commission was formed in December and the lockdown took place on 22 March. The question arises whether a judge is willing to give his services voluntarily in such cases in the public interest without any payment.

The question is also that during the process of recording the statements of the local people and the trial of hundreds of witnesses, will the retired Supreme Court judge be familiar with the local language or dialect?

The role of the district judge in this entire process becomes secondary, as the order to file an FIR under Section 307 (attempt to murder) of the IPC and the preparation of a final report under Section 173 of the Code of Criminal Procedure and any other point is based.

But the District Judge is capable of further investigation like the Commission of Inquiry. He is also suitable to monitor him during the trial process. In such a situation, the Supreme Court's prediction about the role of lower courts or any such effort will show a direct impact on the criminal justice delivery mechanism in the country.

If only a former judge of the Supreme Court will investigate each encounter case, does the apex court want to convey through it that it has no faith in the lower courts, while the case will always be heard at the level of prosecution?

Whether the case is for the accused of murder or rape or any police encounter, the judge hearing in the lower court will remain the same. In such a situation, it will be very important for the Supreme Court not only to look into this aspect but also to ignore their role.

Vikas has a long raw letter of Dubey's crimes. His involvement in more than 60 cases reflects his extensive criminal character as well as his deep involvement in the system. He was also acquitted in the case of killing a leader by entering the police station, as the policemen present at the scene were terrified of him during the testimony. Despite being charged in each case, an army of lawyers granted him bail and the persecution of the witnesses continued.

Dubey's criminal methods kept Kanpur trembling for over two decades. Unlike the Telangana government here, the Uttar Pradesh government set up two committees to investigate the cases involving the killing of eight policemen and the subsequent encounter of Dubey and his operatives.

READ HERE MORE : When Power Will Come Back In Congress Party ?

The first committee was constituted under the Commission of Inquiry Act, 1952, which was entrusted to a retired judge of the Allahabad High Court. Later the Supreme Court handed over the command to the retired judge of the Supreme Court. The second special investigation team, ie SIT, will conduct the investigation under the direction of the Additional Chief Secretary of the state.

When encounter cases are increasing in different states, will it be possible for the Supreme Court to appoint a retired judge of the top court to investigate each case? Will such a long-lasting inquiry does not increase the burden on the state exchequer?

Will the Supreme Court also monitor the aspect that such criminal elements which are a threat not only to the witnesses but to the society as a whole, on which basis they get bail continuously? In the midst of all these exercises, what does the Supreme Court do to restore our declining confidence in the lower courts and the criminal justice system?