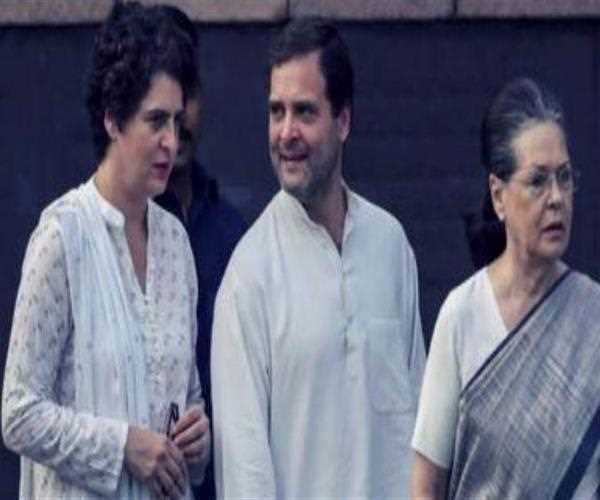 When Power Will Come Back In Congress Party ?

When personal ambitions rise above party interests and factionalism becomes permanent, the party's disintegration becomes natural. Congress has to deal with this reality. The way the revolts are being raised in the Congress today and accusations are being made against each other within the party divided in the camp, the country's largest party is paying for it.

In the battle of perception among the common people, Congress is getting defeated. Recently, in a meeting related to the formal introduction of new Rajya Sabha MPs, there was an open phase of accusation.

It is said that while chairing the meeting, Sonia said that you people should say, I will listen today. Then, in the blows, the finger was directly pointed at the organization. These leaders who have pointed fingers at the organization are said to be former ministers of the UPA government like P Chidambaram, Kapil Sibal, Anand Sharma.

When the matter arose from one side, the people on the other side also did not remain silent. In response to this senior leader, leaders holding important responsibilities in the organization questioned the tenure of the UPA ten years.

He said that if the government did such a good job for ten years, then why was there a chance of going to power? These young leaders included Rajiv Satav, Congress General Secretary KC Venugopal, and Shakti Singh Gohil. It is said that the matter escalated to the extent that former PM Manmohan Singh had to say that you people should not fire the gun from my shoulder.

The allegations and counter-allegations started from the meeting went to social media. Leaders like Manish Tiwari, Milind Deora and Shashi Tharoor, who were ministers in the Manmohan government here, defended the UPA government, in response to which Satava took aim under the pretext of Shero-Shayari. In the end, Congress in-charge Randeep Surjewala had to ask his colleagues not to play twitter and twitter, together they should raise their voice against the Modi government.

In Congress, the battle of supremacy between the new versus old or experienced versus youth has been going on for some time. The old team is considered to be Sonia Gandhi, while the new team is said to be of former Congress president Rahul Gandhi.

Both camps want power in the hands of their respective leaders. While the tussle between the new versus the old had already started before 2014, it started coming to the surface only after that.

The rebellion of these young leaders was seen to be linked to the failure of the leadership of Team Rahul and Rahul Gandhi himself. It was said that these youths of Rahul's team were given full opportunity, but for them, their interests proved more important than the party.

Whatever position is seen in the Congress today, the top leadership of the Congress can be held responsible to a large extent. Congress is rarely as weak, vague, and uncertain as it is at the leadership level today. Today Sonia Gandhi is the interim president of the Congress, but everyone knows that the party has not one, but two centers of power.

For this reason, there is uncertainty and ambiguity at the top level. It is not that questions about leadership have started to arise within the Congress, they have not arisen before. But the question and attack on leadership is now becoming more sharp and straightforward than before.

A view of this came to light when the party in-charge of the Congress Working Committee in the past, directly questioned Rahul Gandhi about his stand on India-China tension. It is said that the young leader doubted the rationale of Rahul's strategy on which Rahul Gandhi spoke. But the matter did not stop here. There was so much talk that a very senior leader of the party had to intervene.

As far as leadership is concerned, Rahul has to replace Sonia in a central role, he is sure to command the party. Yet the delay in this is increasing confusion and confusion among leaders and workers.

Meanwhile, it is being said that some big faces within the party have started a campaign on this issue, in which the work is going on to raise important points by referring to the current challenges and questions of the party in front of the high command.

It is said that the party is preparing to give a letter to Sonia Gandhi, in which some other points are being raised along with the demand for holding fair and transparent elections within the party and making a permanent president. It is also said to seek the opinion of experts present in the party on important issues.

It is also being said that due to the arbitrary running of the party and having many power centers within the party, there is confusion and confusion at the ground level, which the party suffers.

In this, along with Rahul Gandhi, the work of Priyanka Gandhi is also being questioned. It is discussed that many big names of the party are associated with this campaign. It is also being said that this exercise was to start earlier, but due to Corona, it was postponed for a few months.

Power needs to be back in Congress If it is definitely the grand old party of India irrespective of the fact it is also the same party which has seen factionalism and breakings the most too. They need to rise above dynasty politics of Gandhi family and project a new option for the public even in the capacity of an opposition party which is responsible.