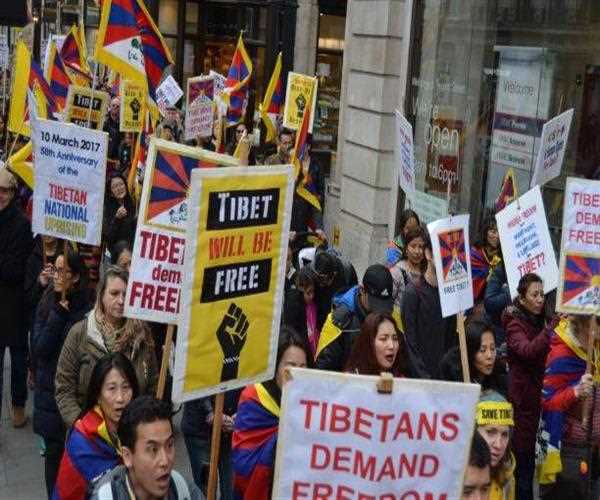 Everyone Cares For Hong Kong But For Tibet No One's There

There is a lot of discussion about the border dispute between India and China. India's relationship with China has never been very good. Sometimes there is peace and sometimes there is a disturbance. One concrete question is why everyone talking about only Hong Kong on the international platform but no joint mentioning of Tibet. Why this partiality ?

1962, 1967 are the years of war and 1996, and 2017 are years of wrangling and tension. Not sure what 2020 is, but India has been cheated. Why the old history of war and tension with China was not seen as a conflict of culture is awe-inspiring. Till 1959, there was no border between India and China. After occupying Tibet, China started eyeing India.

The assimilation of Tibet into China was dangerous for India. Everyone who has been hostile to India, from Genghis Khan to Chinfing, belongs to the Yuhan caste. Those who occupy Tibet also consider Ladakh as a small Tibet. In his view, Arunachal Pradesh is a part of southern Tibet. It needs to be understood that the entire Indian region of the Himalayas, including Ladakh, Arunachal, has a deep cultural, religious and ethnic relationship with Tibet.

The political ideas that accepted the concept of one country and one people with the diversity of cultural nationality of India, did not allow India to develop in its cultural features. The nature of not looking at the question of Tibet with India is not only about politics, but also all social science and humanities are equally guilty. Except for some leaders like Lohia and Deendayal, Tibet was not important to anyone with the idea of ​​protecting India's sovereignty and the border.

It is a spread of the knowledge tradition of Nalanda. The existence of Tibet is a guarantee of India's security and preservation of India's cultural splendor. Tibet is not a small plot. It is one third of today's China. It remained an independent sovereign nation until 1959. It is part of the oldest religious tradition of India in the form of Trivishtap. Here Kailash and Mansarovar are there. After all, how can it be absent from memory and literature?

World peace is also a guarantee of Tibet as a neutral state between two large and strategically equipped nations like India and China. The intellectual of India will fulfill its responsibility by spreading the discussion of Tibet globally and not only help the Tibetans wandering around, but will also fulfill the national duties by building a self-respecting society with cultural understanding on the borders of India.

Today, while China is asserting Arunachal with its demonic attitude, clawing towards Ladakh, making chicken-neck preparations, the millennia-old sense of cultural unity has to be awakened.

Indians will have to prove that Tibet's independence is inevitable. The Tibetan people have the right to live and govern independent autonomous Tibet. After all, why do all the forces of the world stand together on a small territory like Hong Kong, but there is silence on the question of a vast territory like Tibet?

READ HERE MORE : When Power Will Come Back In Congress Party ?

Therefore Europe will not come with him. The entire western world has neither an economic interest nor a cultural connection with Tibet. The absence of Tibet does not even matter on its geographical location.

India will have to fight the struggle of Tibet. Long preparation is required for this. Today, even the present generation of teachers and politicians do not know the reality of Tibet. We did not keep Tibet alive even in our memories.

What do we know about Tibetans more than the nomadic race selling hot clothes in winter in the Tibetan market? I do not know why I am not sensitive. You will know, understand that then it will come to mind that these are the people who once had Kailash Mansarovar, the area of ​​gods and Gandharvas was Trishtishtap.

Tibetans are the shareholders and custodians of India's cultural splendor. Therefore, India has to intensify the diplomacy of its cultural tradition. The common Indian should know that in the war of 1962, a follower of the Tibetan creed should not go to Ladakh, for which Jai Hind was fighting with the slogan. This pride story should be told to every Indian. It will have to be archived and publicized.

If we have done this then we will prove to be an Indian to create a favorable environment in the war zone for the Indian Army. The responsibility of the conscious people of this generation of intellectual society is increasing. They should produce a narrative centered on Tibet. From this, the path of the permanent solution will be found, the pride of humanity will be sung and India's self-respect will grow.