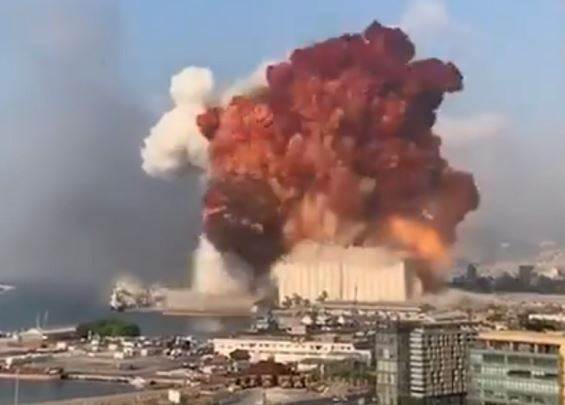 Beirut Bomb Blast : Was It Nuclear?

Yesterday night the country capital of Lebanon which is Beirut witnessed a very severe bomb blast which was in sequence done one after another. It was determined to be a double blast living everyone awestruck.

A big question being started to speculated that was it nuclear? I personally think it was no matter what the stupid government of Lebanon thinks and say.

About 2,750 tonnes of ammonium nitrate was used yesterday night to create this horrific incidence of terror which has shaken the very foundations of humanity in a blink of an eye. Lebanon deserved this! was one of those shameless taglines which were shared across various social media circles.

It occurred outside the Beirut warehouse which is around the central part of the Lebanon capital city and thus the whole city witnessed a heavy amount of damage.

It is being said that this heap of destructive plus dangerous ammonium nitrate was present at the warehouse for 6 years and obviously Prime Minister Hassan Diab denied as he is unwilling to accept the fault of the government intelligence in tracking the threat level of such powerful yet destructive thing.

Nevertheless many lives have gone without any reason in this bomb blast and so far no terrorist group has taken whatsoever responsibility towards this heinous crime. Let it be Al-Qaeda, Islamic State of Syria and Levant (ISIS) or any communist organization too.

It is to be noted that almost 70 people have been injured while thousands have died in this incident. Now Lebanon has become the new target of terrorism or destructive activities which is only harming already fading humanity,

What were the sins of those innocent kids who might be sleeping or playing in their balconies. What they saw was only a glimpse of a huge blast after which their bodies might have got shattered all around the places beneath the slabs of their destroyed house or maybe in the rivers from where they will reach another seashore.

What was the fault of those mothers who always cared for their families, prepared meal, switched off, and on all appliances in the house? Made sure everything is right and what they get is ugly death for the incident which has taken place will leave a black mark of pain and stigma on each and every one.

If Lebanon government cares for its people then it should make sure that no one is left uncaught red-handed for this deadly incident and Diab government cannot do anything it should resign immediately.

READ HERE MORE : Kashmir Now After An Year Of Abrogation Of Article 370

An eye for an eye will make the world go blind was not said by Mahatma Gandhi and that's what should be understood by Lebanon because if it should protect its people by attacking suspected nations then it should readily do that as self-defence is the most basic offensive right for any human being. My sincere condolences to the people and families who have lost their lives, may God give them the strength to overcome this tragic pain.