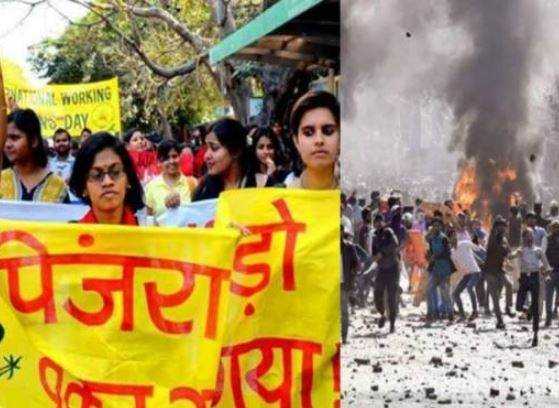 Decoding Pinjra Tod : Is It Civil Society Or Terrorist Outfit ?

The amazing thing is that there is no mention of the riots in Delhi in the statement of United Nations Human Rights Committee. The riots in Delhi claimed 59 lives and caused widespread loss of life and property.

Now the Delhi Police is arresting the perpetrators of the Delhi riots one by one and filing an indictment against them. The Delhi Police have not arrested Devangana Kalita and Natasha Narwal for their involvement in the anti-citizenship law movement.

It is clear from the Delhi Police's indictment that the Delhi riots were not spontaneous incidents but were planned and planned on the basis of the anti-citizenship law movement and its conspiracy was like a breaking cage in the name of student organization Also associated with organizations.

Now the United Nations Human Rights Committee has expressed concern over the arrest of all those who are said to be involved in the conspiracy of the Delhi riots, indicating the involvement of international forces in this conspiracy.

Female students from universities across the country join the movement for student interests, but Natasha Narwal and Devangana Kalita of Pinjarot have used the girls' interest movement first in the CAA i.e. the anti-citizenship law movement and later in the chaos in Delhi took. Natasha Narwal and Devangana Kalita, two prominent women of the same cage break organization, have been arrested by Delhi Police in the conspiracy of Delhi riots and both are facing very serious charges. Both have been accused in the Delhi Police's charge sheet that they mobilized people in Jafrabad by provoking people.

The Delhi riots charge sheet is trying to portray the arrest of Jamia Coordination Committee member Safura Zargar as an oppressive attitude of the Delhi Police towards Muslims, but the truth is that Natasha Narwal and Devangana Kalita are not Muslims And the number of Hindus and Muslims is almost equal to the number of people arrested by the Delhi Police for their involvement directly or indirectly in the Delhi riots.

A nationwide conspiracy is clearly visible following the arrest of those involved in the Delhi riots under the guise of anti-CAA protests. The truth is that the university and hostel administration does not allow any student to stay out of the hostel after a while keeping in view the safety of the girl students in almost all the universities of the country.

Such rules are especially for the graduate students all over the country, but the organization of the cage break got the same system and started the student rights organization started from Miranda House in Delhi.

Trying to stand up by talking At first glance, there is no harm in this, but when looked at the activities of the last three-four years of breaking the cage, it is understood that it had gone far beyond liberating the students from bondage. Breaking the cage in JNU begins to agitate for the independence of Kashmir in 2016 and opposes it with the Left student organizations in Delhi after the abolition of Article 370 from Jammu and Kashmir Ladakh.

The organization started for the rights of the girl students seemed to be working on a completely anti-national agenda and even other leftist ideas started appearing in it. According to the recent charge sheet of Delhi Police, this organization has been involved in anti-national antics. The ethnic and communal division has become a regular part of their activities.

Today the role of this organization needs to be fully exposed because the cage has broken into the premises of small big cities of the country in the name of women equality and if the allegations in the charge sheet of Delhi Police are true then the cage in the premises The real face of the break is also important for the students.

After his role in the Delhi riots, it would be appropriate to call the organization as an India smash organization rather than a cage break and now the statement from the United Nations Human Rights Committee on the arrest of the accused of the Delhi riots is an interference in the internal affairs of the country, as well as Also shows how big a conspiracy is to destabilize India.