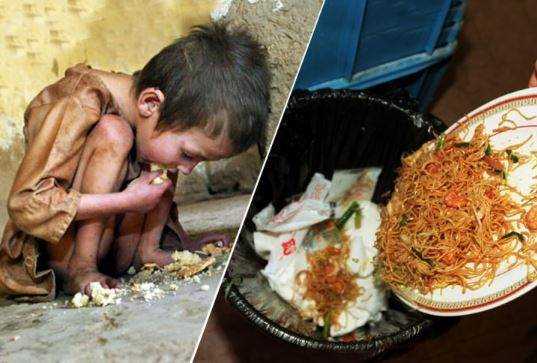 Food Wastage Is An Unaccepted Challenge For India

Food wastage is the dark yet overlooked issue of India. During the global crisis of Corona, many major and developed countries of the world have evaluated their country's conditions very deeply in this contrasting situation.

Efforts are also being made to know what is the effect of this epidemic on food, the most important factor for the survival of humanity. In many countries of South Asia, including West and Central Africa, ordinary citizens have to struggle for food.

There is a great surprise in nations like India and Pakistan. There is a deep gap between prosperity and poverty. It needs to be evaluated. By the way, a big change can be brought from social consciousness in countries like India, Nepal, Bangladesh, Pakistan, etc. Strict laws are now required to be enacted to tackle hunger and malnutrition.

After all, how can it happen that on one side there are many dishes on a plate and on the other hand even dry bread is not destined. According to the World Hunger Index, India is ranked 102 in the world in terms of hunger and malnutrition.

This raises questions on the behavior of living Indian lives. In fact, more than a hundred dishes are made in matrimonial programs in North and Central India. Up to 40 percent of this food is wasted. In India, there is a lot of loss in the journey from the grain farm to the stomach which has become a serious problem for the country. This is the main reason for starvation.

The death banquet is a huge ritual in eastern Uttar Pradesh and north Bihar. This should also be done, but not in those situations where it is often seen that people take loans for fathers and about 30 percent of their food is wasted. India remains the world champion in food wastage. Despite adequate production, every sixth or seventh person in India falls asleep hungry.

This is sad ! to prevent wastage of food, Pakistan is more cautious than us, where the government has fixed the number of dishes made in matrimonial programs. Although initially some of the rich opposed it, when the matter reached the court, the court also called it a demand for time.

Although the central government in India has done a better job in tackling hunger and malnutrition, the lack of social consciousness and the display of prosperity is becoming the main cause of malnutrition and starvation. Due to the efforts of the Government of India, the level of hunger has decreased until the year 2019, but the situation is still is worrying.

The United Nations Food and Agriculture Organization has expressed apprehensions that about 270 million people may face starvation in 2020, twice as much as last year.

There has been a substantial production of food grains in India after 2014, but due to the gang of slack government babus and corrupt bureaucracy, lack of storage facilities leads to a large number of grains being wasted. We also have to pay utmost attention to the education and irrigation of good farmers having a scientific outlook in India. To prevent food wastage, we have to work two-way.

The first is the need for strength training and monitoring of the sluggish employees engaged in distribution work and the workers working in food markets. At the same time, the government should learn from some social and political organizations. Gurdwaras of India feed around five crore people daily across the country. This work continues without any special government help. The big reason for this is that they do not have an army of slack employees.

The time has come that strict laws should be enacted regarding food waste. Also, laws should be made in relation to the arrangement of catering in matrimonial-social ceremonies and they should be strictly implemented.

The government will have to ensure that how many people will be involved in the marriage and how many dishes can be made. While this law may be opposed, the government will have to see how widespread food wastage is taking place. The Corona crisis has given us an opportunity to understand that in this era, including marital-social programs, birthday reports, etc. have been put on hold. Right under compulsion, but consciousness has awakened in people.

The availability of fruits and vegetables at a lower price than during other days during the lockdown indicates that the absence of marital-social events has certainly affected their prices.

After all, capsicum which was earlier sold around 100 rupees kg in the market, started getting 50 rupees kg during the lockdown. The same situation was with other vegetables also. Onion and tomato prices almost halved compared to other days. We have to consider all these aspects.