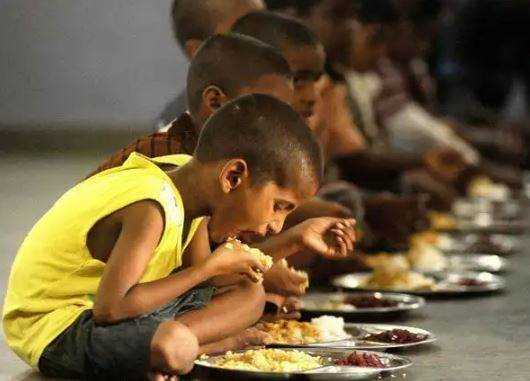 India is fighting a battle on three fronts simultaneously — the Covid-19, which shows no signs of diminishing infection, the economy devastated with heavy unemployment, and the decades-long violent border conflict between India and China, which has left our 20 brave soldiers Took the life of In this scenario what will happen to the children of India, who are our future?

Who is looking after the plight of the weakest among them? And why is this not the main point of our discussion? The population of children in our country is 47.2 crore, which is the highest in the world.

Our country has some of the most hungry and malnourished children in the world. According to the State of the World's Children 2019 published by UNICEF, malnutrition is the cause of 69% of deaths in children up to five years of age in India.

Covid-19 has made the condition of millions of poor children worse. With school closures during the lockout, children attending government schools are no longer getting the free, hot cooked midday meals they used to get every day.

Instead, they are given raw ration. Anganwadis are also mostly closed. It is clear that this accidental disruption will further deepen child malnutrition in poor communities, leading to long-term adverse effects on the health and well-being of children.

Central and state governments have announced several measures to reduce the hunger of the people. However, most of these measures are for the general public. Children remain neglected citizens. Why is it like this? One reason for this is that unlike adults, children are usually not in a position to highlight their plight, as Deepa Sinha, who teaches at Ambedkar University in Delhi and actively pursues civil society-led food Campaigns.

The nutrition campaign (National Nutrition Mission) launched by Prime Minister Narendra Modi in Jhunjhunu, Rajasthan in March 2018 is trying to improve nutrition indicators across the country. But the epidemic has derailed many initiatives.

In March this year, the Supreme Court asked the Center and all states to formulate a uniform policy, to ensure that nutritional food to children and plans for nursing and lactating mothers in efforts to prevent the spread of Covid-19 Were not adversely affected. But despite the orders of the Supreme Court, a uniform policy was not made across the country.

Kerala, whose Mid-Day Meal Scheme is one of the most successful schemes in the country, is distributing mid-day meals to children whose schools have been closed due to Kovid-19, partly due to its long-term welfare policies. Some poor states of the country are also making sincere efforts in this direction.

In the year 2017, Jharkhand was in the headlines as an 11-year-old girl who died of hunger during the school holidays when lunch was not provided. Elina Horo, president of the Adivasi Mahila Network, says that 'today in many parts of Jharkhand like Simdega, schools are ensuring that poor children do not go hungry. Teachers are distributing ration at the children's home.'

Sangeeta Sahu, who works with the Right to Food Campaign in Chhattisgarh, says that after the closure of the schools, the state government provided raw ration for 40 days on weekdays and additional rice for 45 days of summer vacation, Provided lentils, soya chunks, pickles, oil, and salt.

Sahu explains that the Right to Food campaign took place in March in the High Court, along with other groups seeking food for children, which normally include mid-day meals and the ICDS (Integrated Child Development Services - the world's largest government-aided childhood Development program), filed a PIL and this has helped in maintaining pressure on the state government.

She says that the government should provide extra nutrition and energy-rich food to severely malnourished children and supplementary nutrition / mid-day meals to children, pregnant women and lactating mothers and adolescents.

A recently released UNICEF status report states that children discharged from nutritional rehabilitation centers in Chhattisgarh are constantly asked through telephone. Auxiliary nurse midwives in Maharashtra keep in touch through WhatsApp groups with children under three years, pregnant women, and lactating mothers to avoid infection due to contact at home.

Activists urge that the government immediately provide an integrated child development program during the epidemic as an essential service to provide critical development monitoring, vaccination, cooked food and nutritional counseling services with adequate safety protocols to prevent the spread of the virus.

Recognize and re-start Anganwadi centers and provide hot, cooked food to every child during Mid-Day Meal Scheme during school closure due to the COVID epidemic, to ensure that poor children get at least one per day Once complete food is available and malnutrition does not increase further.