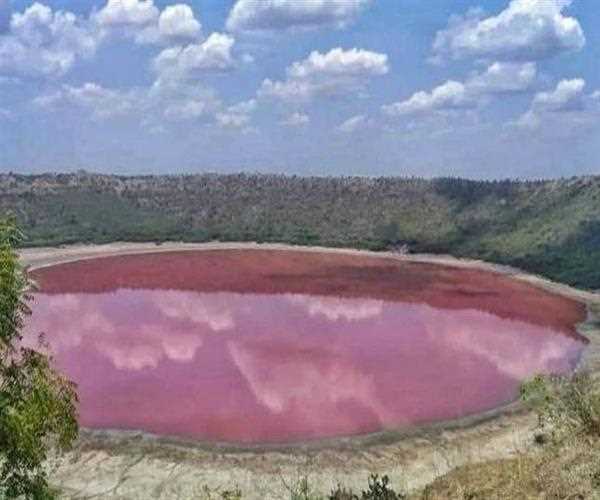 The color of the water of the Lonar lake of Maharashtra has changed to pink overnight. Experts are assuming this due to salinity and the presence of algae in the reservoir.

Lonar Lake is 500 km from Mumbai in Buldhana district. It is extremely popular among tourists. The lake is believed to have been formed about 50,000 years ago by a meteorite hitting the Earth. Scientists from all over the world are also very interested in this lake.

Local people as well as naturalists and scientists are surprised by the change in the tone of the water of the lake with a diameter of 1.2 kilometers. Experts say that this is not the first time the color of lake water has changed, but this time it is clearly visible.

Gajanan Kharat, a member of the Lonar Lake Conservation and Development Committee, said that the lake is a notified National Geographical Heritage Monument. Its water is saline and its pH level is 10.5. He said that there is algae in the reservoir. Changes in watercolor can be due to salinity and algae. '

Kharat explained that 'there is no oxygen below one meter below the surface of the water. The water of a lake in Iran also turned red due to salinity. '

He said that the water level in Lonar lake is still low because fresh water is not filled in it due to no rain. Due to low water level, the salinity will increase and the nature of algae will also change.

READ HERE MORE : Our Biodiversity Has Entered The Stage Of Extinction

Dr. Baban Saheb Ambedkar of Aurangabad, Dr. Madan Suryavanshi, Head of the Department of Geography at Marathwada University, said that given the large-scale change in water, it can be said that there is no human intervention in it.

The depth of this meteoric lake of about 1.8 kilometers is about five hundred meters. Even today many scientists of the country and abroad are doing research on the water of this lake. It is said that the water of the lake changes from time to time. Why this change happens, the mystery remains even today and many scientists are busy in knowing this secret.

After hitting the Earth, the meteorite which hit the lake had broken into three parts and made a lake in two other places besides Lonar. Although now the other two lakes have dried up completely, water still exists in Lonar.

Around the year 2006, there was a strange stir in Lonar Lake, the lake water suddenly evaporated. The villagers saw small shining crystals of salt and other minerals in the lake instead of water.

How old this lake is can be gauged from the fact that it is also mentioned in Skanda Purana, Padma Purana and Ain-e-Akbari. However, it was recognized in 1823 when the British officer J.J. E alexander arrived here.

There are also remains of several ancient temples near Lonar Lake. These include- Daityasudan Temple - This temple is present on the banks of Lonar Lake. This ancient temple is dedicated to Lord Vishnu, Durga, Surya, and Narasimha. The structure of this temple is similar to the temples of Khajuraho. Apart from this, there are ancient Lonardhar Temple, Kamalja Temple, Motha Maruti Temple.

He said that 'the water changes according to the weather and the same can happen in Lonar lake. If we can go there in a week, we will be able to check the change. Only then can I tell anything more about it.'

Lonar Lake is one of the strangest places in India and definitely the most indigenous yet mysterious lake on the planet. As you strive to uncover the ravel of dark mysteries of this secret lake you tend to get a sense of darkness from beneath. Try to visit this place in your entire lifetime for once and experience the secrecy as it is on ground zero.