India and Pakistan have fought thrice and in all three times, India has won. Recently another terror attack by Jaish  E Mohammad (Pakistan based terror group) results into the death of our 40 brave Indian soldiers. In response, India has carried out air raids on rebel camps inside Pakistan, raising fears of a war between the two nuclear-armed South Asian nations.

Let’s compare the military arsenals of both countries:- 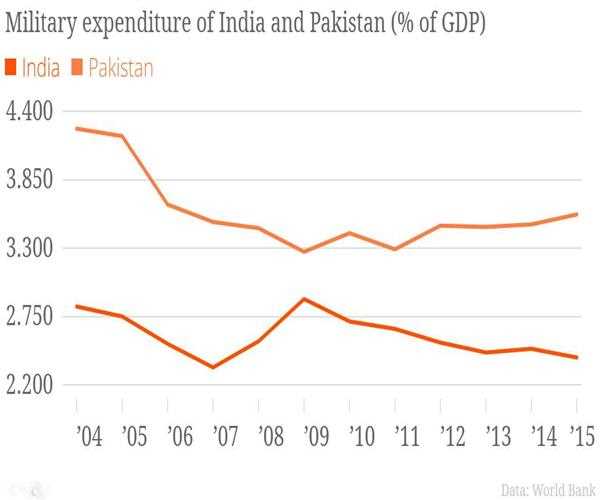 Both the nations have ballistic missiles which are capable of delivering nuclear weapons. India has a total of nine types of missiles, including the Agni-3 with a range of 3,000km to 5,000km.

Pakistan's missile programme, with aid of Chinese assistance, built mobile short- and medium-range weapons that can reach any part of India, CSIS said. The Shaheen 2 has range, up to 2,000km.

Pakistan confirmed that it had acquired tactical nuclear capability in 2011. India has 130 to 140 nuclear warheads, compared with Pakistan’s 140-150 warheads.

Despite a larger army, the capability of India's conventional forces is limited because of inadequate logistics, maintenance, and shortages of ammunition and spare parts.

The Indian air force has 127,200 personnel and 814 combat aircraft, substantially larger but there are concerns about its fighter jet fleet. In running condition, India has 610 combat aircraft, 5 AWACS, 5 Reconnaissance, 3 Electronic warfare, 6 Tanker, 338 Trainer Aircraft, 261 Transport, and 426 Helicopters. India's defense plans require 42 squadrons of jets, about 750 aircraft, to defend against a two-pronged attack from China and Pakistan. With older Russian jets like the MiG-21, first used in the 1960s are retiring soon.

India's navy is quite strong in comparison to Pakistan consists of one Aircraft carrier, 16 Submarines, 14 Destroyers, 13 Frigates, 106 Patrol, and Coastal combatant vessels, and 75 Combat-capable aircraft. Pakistan has a significantly smaller coastline, has only 9 Frigates, 8 Submarines, 17 Patrol and Coastal vessels, and 8 Combat-Capable aircraft.