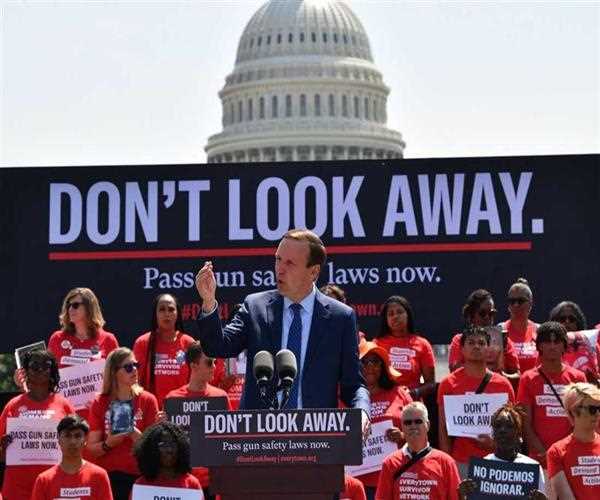 Tuesday saw the U.S. Senate take a first step toward enacting the nation's first significant gun-control legislation in decades, spurred on by two mass shootings in a country that has long battled to reduce widespread gun violence.

Several senators from both parties, including the 10 Republicans it would need to succeed, have supported the agreement. The Senate will remain in session until the legislation is passed, according to top Senate Democrat Dick Durbin. The bill would be the first significant effort at gun regulation in decades if it is approved by both chambers of Congress.

Senate Minority Leader McConnell declared his support for the text in a statement.

'For years, the far left falsely claimed that Congress could only address the terrible issue of mass murders by trampling on law-abiding Americans' constitutional rights. This bill proves that false,' he said. 'Our colleagues have put together a commonsense package of popular steps that will help make these horrifying incidents less likely while fully upholding the Second Amendment rights of law-abiding citizens,' the statement reads.

In reaction to recent mass shootings in Buffalo, New York, and Uvalde, Texas, the US House of Representatives enacted a comprehensive gun control package, but there is practically no possibility that the Senate will ratify it and make it into law.

The legislation would increase the minimum age requirement to purchase a semi-automatic weapon and outlaw the sale of ammunition magazines that hold more than 15 rounds.

By a vote of 223-204, primarily along party lines, the measure was approved.

As the Senate pursues discussions aimed at boosting background checks, bolstering school security, and mental health programmes, it has no chance of becoming law.

The House measure does, however, provide Democratic legislators with the opportunity to explain to voters in November where they stand on initiatives that, according to surveys, are generally favoured.

'Although we cannot save every life, shouldn't we at least try?

America, we hear you, and today in the House, we are responding to your demands,' declared Democrat Veronica Escobar of Texas.

“Notice who is with you and who is not with you.”

After hearing heartbreaking testimony from recent gunshot victims and family members, including that of Miah Cerrillo, 11, who covered herself in a classmate who had died to prevent being shot at Uvalde Elementary School, the House committee voted.

Mass shootings in the US seem to be a never-ending cycle, yet Congress has seldom been moved to action.

However, the massacre in Uvalde of 19 students and two teachers has rekindled efforts to the point where parliamentarians from all parties are debating the necessity of acting.

Nancy Pelosi, the speaker of the House, remarked, 'It is horrible that our children are made to live in such continual terror.

The House vote, according to Pelosi, 'will create history by making progress.'

However, considering that Republicans were resolute in their rejection, it is unclear where the House legislation would go following Wednesday's vote.

The Republican Jim Jordan of Ohio remarked, 'The answer is not to remove the second amendment, but that is exactly where the Democrats want to go.

The majority of the effort to establish common ground is being done in the Senate, where the backing of 10 Republicans is necessary to pass legislation. To craft a compromise bill by the end of the week, almost a dozen Democratic and Republican senators met in secret for an hour on Wednesday. More discussions regarding a strategy that is anticipated to suggest modest moves, according to participants, are required.

The House bill combines several measures that Democrats had put up before the recent massacres in Buffalo and Uvalde. According to investigators, the suspects in the shootings at the Buffalo supermarket and Uvalde elementary school were both 18 when they purchased the semi-automatic guns used in the assaults. The measure would raise the requirement for the purchase of certain firearms to 21.

'Budweiser cannot be purchased by anybody under 21. Ted Lieu, a Democrat from California, declared that we shouldn't permit anyone under 21 to purchase an AR-15 weapon of war.

Republicans have pointed out that a recent decision by a US appeals court ruled California's restriction on selling semiautomatic guns to adults under the age of 21 to be illegal. 'This is immoral and against the law. Why is that wrong? We're telling 18-, 19-, and 20-year-olds to sign up for the draught, after all. Go die in service to your nation. Thomas Massie of Kentucky stated, 'We expect you to defend us, but we're not going to provide you with the means to defend yourself and your family.

The House measure also establishes fines and up to five years in jail if a youngster uses a gun that was improperly kept to harm or kill themselves or another person after it was not properly stored. It also provides incentives to encourage the adoption of safe gun storage mechanisms.

Additionally, it expands on executive orders that ban 'ghost weapons' that are made without serial numbers and fast-action 'bump stock' devices.

We continue to work hard with both parties to save lives and stand up for families, the White House press secretary Karine Jean-Pierre tweeted in support of the House bill.

Five Republicans supported the measure: Adam Kinzinger of Illinois, Chris Jacobs of New York, Brian Fitzpatrick of Pennsylvania, Anthony Gonzalez of Ohio, and Fred Upton of Michigan. Only Fitzpatrick is running for office again. Jared Golden of Maine and Kurt Schrader of Oregon were the only Democrats to vote against the measure. In the Democratic primary, Schrader was unsuccessful in winning reelection.

A bill that would enable families, police, and others to request that federal courts order the removal of weapons from persons who are thought to be at extremely high danger of injuring themselves or others is also anticipated to be approved by the House on Thursday.

These 'red flag laws' are now present in 19 states and the District of Columbia. A court might order the temporary removal and storage of the guns under the House measure until a hearing can be conducted no later than two weeks later to decide whether the firearms should be restored or retained for a certain amount of time.