Is gun lobbying in America justified?

America, the world’s strongest superpower and the freest country is said to be the place where dreams could come true. They are called the regulators and protectors of free rights. Apart from these achievements, the country has higher levels of gun ownership than any other free country in the world.

Surely, keeping a gun with a license is common at various places. But for every 100 Americans, there are 120 guns available. And this number increased to approx. 80% during the pandemic. You would say it could be because of the adult population there, but this is not true. Apart from the people who are adults or licensed ones, the most vulnerable group also has access to guns very easily- the teenagers and young adults! That means there is a serious issue of Gun Lobbying in America. 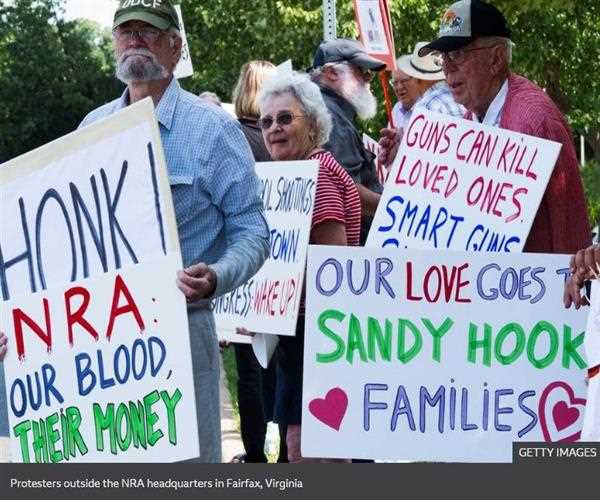 People there don’t consider even for once that it is not beneficial for teenagers to possess violent weapons at such a young age. In totality, there are 393 million guns with American citizens. These involve both the legal and illegal population base there. There is no law within the country for people to register in any database for their guns.

Then why is there so much ado?

You may wonder why we care. Let there be guns or arms with people. But there are a lot of reasons for quoting my views on this topic.

• According to the statistical data, almost 20,000 Americans died due to gun violence. And the violators were not necessarily adults or criminals. But teenagers or common citizens of America have also been involved in this.

• It is neither ethically nor morally correct to hand over guns illegally to teenagers. They are bound to be arbitrary in their behavior. Possession of guns and unfulfilled demands could lead to a more erratic nature. These kids then later turn to drugs and extreme forms of violence.

• More aggression and a sense of superiority may lead to more people towards terrorism. It is an already bigger cause that bugs the world, and if such a powerful country prepares its population for violence then the world would be at a dangerous place.

• On one hand America vows to kill the terrorists and launches surgical strikes at terror camps, and on the other hand, it is openly supporting gun lobbying. Leave the restriction measures, they don’t even keep a database to prove the legality of the guns circulated. In such a situation, how can they prevent their own people from becoming terrorists over time?

• What would be the future of these young adults who are given the freedom of violence instead of education for peace?

Who is accountable for all this?

Partly, the government and partly the most debated agency; NRA (National Rifle Association) in the US. It calls itself a civil rights protection body but works totally contrary to this. Initially, it was started as a US Civil War veterans as a recreational group designed to 'promote and encourage rifle shooting on a scientific basis'. But now, it distributes the guns both legally and illegally in the state of America to anyone who wants it.

It got involved in gun lobbying during 1934 when the political angel got involved and it started mailing its member regarding the firearm bills. Later on around 1975, it became actively involved in American politics and started to influence it also by a newly formed lobbying arm, the Institute for Legislative Action. Over time, it has turned into a well-established firm with a considerable budget to influence the American govt. too. So, now do you understand why it is not possible to stop gun lobbying?

Here is a snapshot of the metrics of gun lobbying. Although it is not official or through a govt. agency, but it has been prepared by many other organizations. 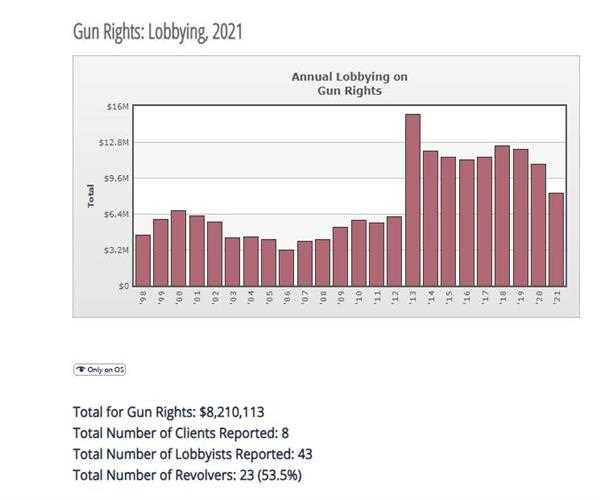 There are other factors too, which make the NRA accountable enough for gun lobbying:

• Almost half of the American population owns a membership.

• The organization is also accused of inflating the membership openly.

• It has a strong political membership base including ex-President George Bush, many big actors, and other candidates.

• They give “ratings” to the political members in terms of their pro-gun policy & attitude. This rating is so strong that it could affect their candidature in elections.

• Due to this politically engaged membership, it has a heavy influence on the pro-gun policies.

• It lobbies all forms of guns and rifles and distributes them openly.

• On being questioned, it argues for the safety of the Americans.

• It is also heavily criticized for shooting in Sandy Hoot Elementary School.

• It opposes the gun restriction measures and openly supports the legislature to expand gun rights.

• Its average spending is far more than the control advocacies that have been formed in America. The most recent has been reported $250 million for gun lobbying.

• Not only this, but it also spends $3 million per year to influence the pro-gun policy.

However, for the first time in 2018, the NRA witnessed opposition from control advocacies. They also had more amount to control gun lobbying than the NRA.

Due to the political rating for pro-gun policies, the politically engaged membership doesn’t offend the NRA. The direct outcome of this has been seen among the population.

There are incidences of heavy violence and shooting in the open area by people over petty issues. They can also keep their guns unconcealed.

Due to open gun lobbying, the population which is in the vulnerable age group is the most affected. Are all the guns falling into the right hands? Isn’t it a primary duty to keep a check or a database to prove the legality of the buyers?

People die without any reason over petty issues. Their lives have become cheaper than guns, and the teenagers whose primary goal should be education have been drifted towards violence, drugs, and several kinds of abuse. How can the govt. ensure that this won’t lead to terrorism in the future? Is gun lobbying for safety or to deprive people of safety?