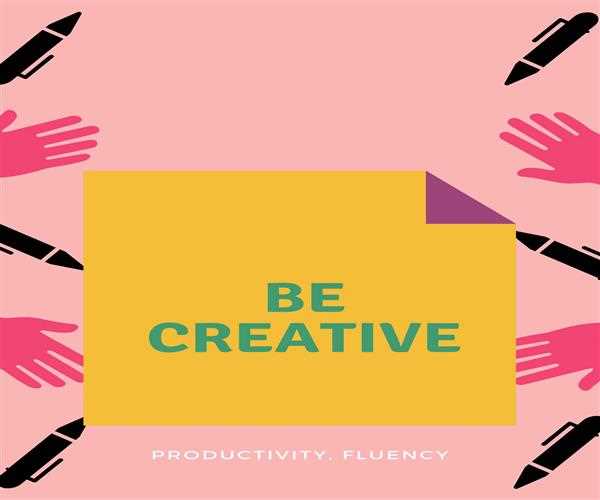 Creative creativity is still a mystery. Despite the tremendous advances in neuroscience, scientists have yet to explain how people come up with original ideas. But they still appear. And more than that, by using advanced scientific knowledge we can influence the creative process. How to increase creativity by exploiting the features of our brain.

Set yourself a box

Research shows that one of the main problems that stand in the way of greater creativity is the desire of people to move along the path of 'least mental resistance', relying on ideas that they already have or trying to use all available resources.

Scientists suggest that setting voluntary limits can boost creativity because it forces even creative people to work outside their comfort zone.

For example, if you need to describe something in 1000 words, try doing the same with 500 words. You will have to look for workarounds to fit as much information as possible in a minimum of words.

You can apply this idea in practice using the creative technique “100 Ideas”. You have to come up with 100 ideas of any kind to solve your problem. Even the craziest and most fantastic ones. This technique will simply force you to go beyond what you are used to.

Another feature that scientists have noticed in creative people is an increased tendency to revise the problem.

Instead of actively thinking about ways to solve the problem (as their less creative colleagues do), they sit back and play with the problem, looking at it from different angles.

Let's say you are an artist who doesn't know what to draw. He wants to do something catchy, something that evokes some emotions in the viewer. The artist thinks for a long time, but not a single sensible idea comes to him. He focused too much on the general aspect: 'How to draw something emotional?' Instead, he could look at the problem from a different angle: 'What visual image would cause a feeling of loneliness?'

It has long been known that task detachment helps to overcome the creative block and achieve insight. But, in addition to the temporal distance, you can also use the 'spatial' one.

Subjects in the study were able to solve twice as many problems when they were asked to think of the problem as something distant rather than something close.

Try to imagine your task as disconnected from you and remote from your location.

According to the research, this will help to understand the problem deeper and be more creative in solving it.

Roll up your sleeves and work hard before daydreaming

While research after research confirms that dreaming and dozing can aid in the creative process, there is another aspect that is usually overlooked.

One study, in particular, shows that the less you work on a problem, the less distracted daydreaming will help you. That is, daydreaming and incubation are most effective in a project in which you have already invested a lot of creative effort.

Therefore, before indulging in mental wanderings lazily, make sure that you have already sweated a lot on the creative task. Only then will you get the maximum effect.

Immerse yourself in something absurd

Scientists have concluded that the mind always seeks to comprehend what it sees, and surreal/absurd art for a short time puts the brain in a state of 'overload': it tries to understand exactly what it is looking at or what it reads.

If you are stumped in solving your creative problem, go and see the paintings of Salvador Dali or read the works of William Burroughs or the same Kafka.

Give yourself a special name with the help of a nickname generator according to your personality, moods, behavior. You’ll find various names.

Be creative when you are in an intense mood

For a long time, it was believed that joy is the ideal state for creativity.

However, a 2007 study from the American Psychology Association led to a slightly different conclusion: creativity improved when both positive and negative emotions increased.

So you can put strong negative feelings to good use - just redirect their energies into creativity.

Exercise is beneficial for both your body and also your brain.

Nowadays, a lot of studies have been accumulated that speak about the benefits of physical activity for creative thinking.

Scientists believe this effect is due to improved blood flow to the brain and increased mood. This is similar to how some other research shows that thinking about love also stimulates creativity. It's not about the action itself, but about changing the mood.

Exercise during a break can give you some kind of insight. Plus, it also uses the incubation effect.

Use these scientifically proven techniques to boost your creativity:

This is Aliana Sharma, currently working as an SEO Executive in the Information Technology industry. This industry is like a game in which you learn and have fun as you pass a level and know about mor . . .