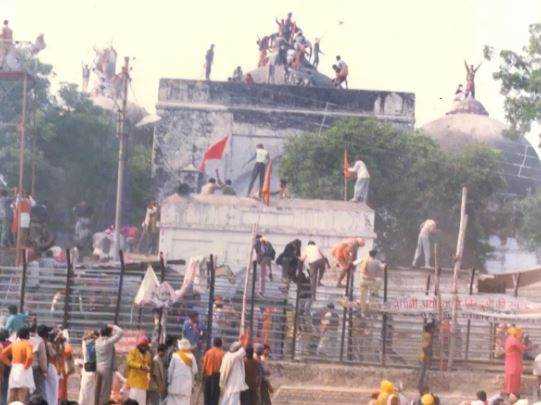 The Supreme Court has already ruled on the years-old controversy over the Babri Masjid-Ramjanmabhoomi site in Ayodhya. Now the court is yet to decide on the accused in the case of demolition of that structure.

In this news, we are telling you what was the disputed structure demolition case. The story given by the Supreme Court in the temple and the Bhoomi Poojan done at the said place.

The disputed structure was demolished in the Ram Janmabhoomi premises on 6 December 1992 in Ayodhya. Many veteran leaders of BJP were accused in this, including Lal Krishna Advani, Uma Bharti, Murali Manohar Joshi, the then Chief Minister Kalyan Singh, Jaibhan Singh Powaiya and many other big leaders. All faced court action.

This is the whole case

In the year 1885, for the first time this case reached the court. BJP leader Lal Krishna Advani took out Ram Rath Yatra in the 90s and then the Ram temple movement gained momentum. On December 6, 1992, the Karsevaks broke the disputed structure and the case has been going on in court since then.

The CBI court will give a verdict in the case after 27 years. Then a total of 50 FIRs were registered in this case. The three investigating agencies jointly discussed this. Special CBI Judge SK Yadav will deliver a verdict on September 30 (Wednesday) in the disputed structure demolition case. The CBI filed a list of 994 witnesses in court to prove the prosecution by filing the charge sheet in several stages.

The CBI had filed a charge sheet against 49 accused in this case, out of which 17 people have died. CBI counsel Lalit Singh said that the court had reserved its verdict on September 1 after hearing the arguments of the defense and prosecution.

In the case of Ram Janmabhoomi Babri Masjid, the order to open the door of the disputed site was ordered on 1 February 1986, before it was locked for 37 years. Neither puja nor any other activity was being done.

Barely 40 minutes after the order of the judge, City Magistrate Faizabad reached the Ramjanmabhoomi temple and opened the locks on the gate. The judge also allowed that the people go to Ramjanmabhoomi for darshan and worship. In his order, he made it clear that the state government should not impose any hindrance and restriction on the Hindus who file an appeal and worship in the Ram Janmabhoomi.

The name of Mir Baqi comes up again and again in the Ayodhya dispute because it is said that the same commander had built Babri Masjid here in the name of his emperor Babur. According to the inscriptions of the mosque, Mir Baqi built this mosque in 1528-29 on the orders of the Mughal emperor Babur.

At one time it used to be the largest mosque in Uttar Pradesh. According to Wikipedia, it was also known as Masjid-e-Janmasthana in the 1940s. The name seems to suggest that this land has been considered the birthplace of Lord Rama.

The Supreme Court has already ruled for the construction of a Ram temple at the disputed site in Ayodhya. Also said to give separate land for the mosque. A five-judge bench unanimously gave this historic verdict 5-0.

The apex court directed the central government to set up a trust within three months to construct the temple at the disputed site. The bench said in the judgment that the right to disputed 2.77 acres of the disputed land should be handed over to the idol of Ramlala. After the decision, Prime Minister Narendra Modi has done Bhoomi Pujan here with full legalization, now the work of temple construction has moved forward.