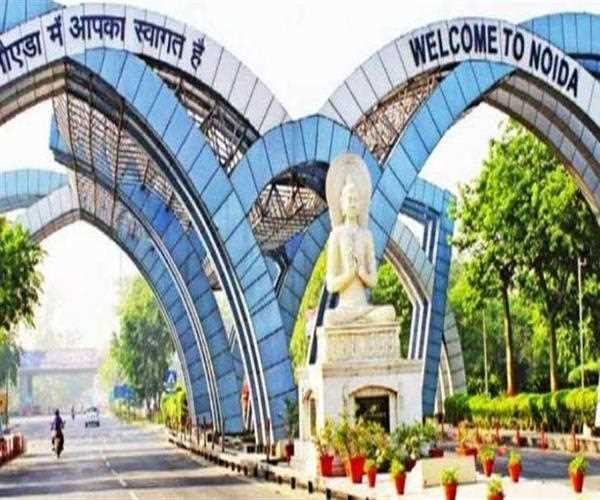 In the current era, the film industry, which is under the silence of the Corona epidemic, is surrounded by an uproar of the reasons for the death of Sushant Singh Rajput. The incidence of drug addiction is peaked at the peeling rate in the Channel Hills.

Uttar Pradesh Chief Minister Yogi Adityanath has offered to set up a new film city in Noida in the context of allegations of counter-holes in Teri-Meri thali and Thackeray's incursions of conflict between UP and Maharashtra from time to time.

His proposal opens up a new vane of expectations. Taking the shape of Film City will fulfill the dreams of thousands of millions. The way of employment of many people will be paved and the migration of talent and workers from UP will stop.

With the readiness with which the announcement has been made and the film, city has been formed, then employment in UP can come true at your doorstep on the lines of the slogan 'Sarkar apne dwar'.

The political womb that the new film city design is born from is powerful, so of course, it will be ready fast. Other infrastructural needs such as brick, cement, slurry, iron, iron, and steel will quickly build-up, and in the long term, the structure for the Film City will be erected.

Although everyone knows that building a house is easy, it is difficult to convert it into a house. Political will, money and resources will undoubtedly create a city, but filmmaking is a little different than this, it is not made of mere money and resources, for this, artistic will and imagination are the key elements. No one becomes like Guru Dutt and Gulzar.

The seashore can also be artificially crafted or will show the broad banks of the Ganges-Yamuna, but where will it bring the stormy spirit that produces the soul in the films. The real challenge is to create a culture that is based in Mumbai's Jarre-Jarre. This culture is necessary for every region, not just film. If there was a culture of sports in Meerut, then national and international players came out.

Making Noida Mumbai may not be as easy as breaking the stars from the sky, but it is not as easy as the work of the left hand. What is it like in Mumbai? How many people from UP and different parts of the country, especially young people, go to Mumbai in search of work. In a way, the whole country is merged there. The great thing is that everyone's own stories can be seen there in their original form.

Obviously, film policy is more important. Dada Saheb Phalke and his colleagues made films by adding money from here to there and kept up to the extent of passion. He made the first silent film Raja Harishchandra in Hindi and Marathi. Other filmmakers of that era have the same story.

Star, stardom and earning could hardly have been anyone's goal in that period, otherwise, such a long run with limited resources was not possible. Since then, this passion and people's passion for it is the mainstay of the film industry. Nagesh Kukanur makes Hyderabad blues on a budget less than normal cameras and earns many times the cost. There have been many filmmakers who have done and are doing things beyond glitter.

Ramoji Rao Studio in Hyderabad is also well equipped. The producer-directors of Punjab have a large lobby in Mumbai. Chopra, Johar, Kapoor, etc. have their dominance. Despite this, the parallel film industry in Bollywood could not flourish in Punjab.

After the struggles of increasing familism and regionalism in Mumbai, many times there were demands and demands to move the Film City somewhere, but Parwan could not climb it. Even in the neighborhood, film production did not flourish in Pune itself, whereas most of the film-makers live there.

Even the famous Film and Television Institute located there is now losing its shine. From Rajasthan to Madhya Pradesh, several efforts have also been made in this direction at the government level. There were also meetings about this several times in Jaipur.

The land near Jaipur was seen, yet the issue of Film City is lying like a boxed film. While filmmakers and big financiers like Tarachand Barjatya of Rajshri Production are themselves from Rajasthan.