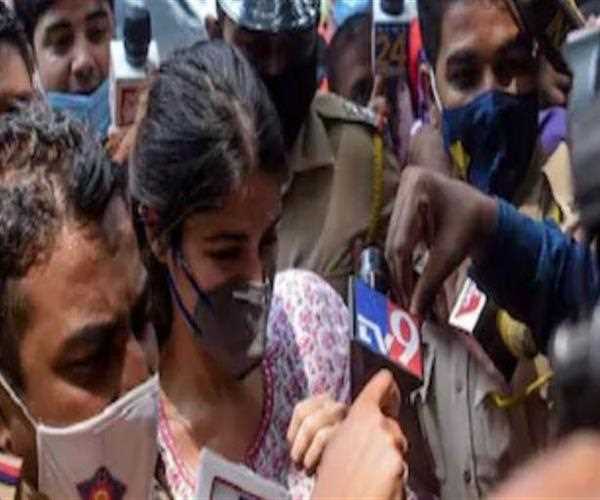 Understanding The Term 'Witch Hunting' In Context To Rhea Chakraborty

Rhea Chakraborty, an alleged accused in the Drugs case related to the Sushant Singh Rajput death case, is currently in judicial custody. Rhea has filed a petition in the Bombay High Court.

Rhea has said in the petition that she is innocent and the Narcotics Control Bureau is intentionally harassing her. Rhea has also said that she has been the victim of 'Witch Hunting'.

Rhea Chakraborty's statement: Rhea Chakraborty has said in the bail petition filed in the Bombay High Court that he is innocent and the Drug Control Control (NCB) is deliberately making serious allegations against her and her family.

She said that she has been a victim of Witch Hunt (search operation of suspects). In the bail plea filed in the High Court, Rhea Chakraborty said that she is just 28 years old and apart from the NCB investigation, she is also facing three investigations and parallel media trials of police and central agencies. Let's know what is 'witch hunting' and how it affects people.

'Witch Hunting' is called 'search for suspicious persons'. In this, after accusing a person or a group, without any concrete evidence, to consider him or her, as an accused and try to punish him, is called Witch Hunting.

Although in most cases the punishment is given after the conviction, in this, people start convicting the accused before the crime is proved which causes mental torture. In a case, media trial has been called witch hunting but if the matters is of man, no one talks about it. In the case of a woman, it is considered witch hunting.

If we talk about the nature of Witch Hunting in the country, then mainly women, the casteist system and patriarchy culture are targeted. In this, women are exploited through baseless and baseless allegations. It is common for women to be victims of 'witch hunting'. For example, in the year 2019, the case of Witch Hunting was found in Odisha where the corpse of a woman and her four children were found in the village well.

The people of the village attacked the woman's house late in the night in which her entire family died. Witch hunting was the cause of the death of the woman and her children. That is, the woman and her family were killed on suspicion. According to Odisha Police records, in 2017, there were 99 cases of 'witch hunting'. Some such cases have also been seen in Jharkhand.

Publicly mental harassment of the victim on the basis of suspicion is called Witch Hunting. This practice of publicly blaming a person or group in public before a proper investigation in a case is leaving a negative impact on the social environment.

Talking about the latest case of 'Witch Hunting', Bollywood actress Riya Chakraborty is an accused and also arrested in the drugs case, Riya has shown herself as a victim using this word in court.

After a long questioning, Rhea had counted the names of 25 Bollywood celebrities, accepting the charge of drug connection. In this, the name of actor Saif Ali Khan's daughter and actresses Sara Ali Khan and Rakulpreet Singh was revealed. After this sensational revelation of Riya, there was a big stir in Bollywood.

Here, after Rhea's revelations on drugs, actress Kangana Ranaut released her statement in the drugs case, that if the team of narcotics in Bollywood investigates, many names can be revealed, but this statement of Kangana was overshadowed when in an interview in 2016, actor studies Addhyan Suman had said about Kangana taking drugs.

Here, Shiv Sena leaders Sunil Prabhu and Pratap, angry with Kangana, prepared to surround Kangana on the basis of an old interview of X boyfriend study Suman and submitted a copy of the actor's interview to the Maharashtra government.

The Thackeray government has ordered an inquiry into the matter. State Home Minister Anil Deshmukh has confirmed this. She said that this investigation will be conducted on the basis of an old interview by actor study Suman. After that interview, what happened in the media against Kangana can be called Witch Hunting. Even now there have been many reports about that interview on Kangana.

The witch hunting is still on especially on the women and the sad party the news media led by women is leading it maybe out of vengeance or job pressure. But there are more men to it and only one named Abigail Pandey hat been summoned which is the ironical part.