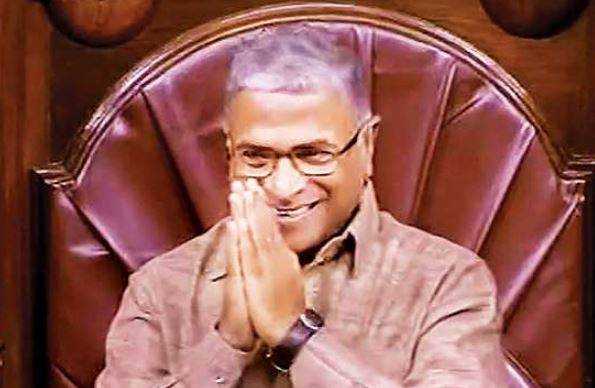 An Introduction Of Harivansh Narayan Singh

Harivansh Narayan Singh of Janata Dal (United) has been re-elected as Deputy Chairman of Rajya Sabha. This is the second time that he has been elected to this post. He defeated Manoj Jha of RJD.

He was the strongest candidate for this post in the election. It was believed that NDA would again make him a candidate. So did happen. In view of the party position in the Rajya Sabha, his position was stronger than UPA's common candidate Manoj Jha.

Before joining politics, Harivansh had made a mark in journalism as a strong editor and journalist. He started his career with a job of 500 rupees. Now he has definitely made a special identity in the politics of the country. 10 special things about them.

He was born on 30 June 1956 in Sitab Diara village, Ballia. Originally he belongs to a middle class family of agricultural background. His connection with the village continued. Harivansh studied economics at Banaras Hindu University. Then from here he obtained a diploma in journalism.

In the year 1974, when Jayaprakash Narayan was awakening for the entire movement throughout the country, he too jumped into this movement. He took part in it very enthusiastically.

In 1977, he started his first job with the Times of India for 500 rupees. After this, he was sent to Mumbai in Dharmayuga, the magazine of this media house. Dharmyug was the most prestigious magazine of the country in those days. Harivansh worked there till 1981.

In 1981, he started a government job at Bank of India, but he did not like it. After doing this job for four years, he joined the media house publishing the Amrit Bazar Patrika newspaper in Kolkata, which is publishing the new magazine Sunday in Hindi. was going. Here he started working on the post of Assistant Editor.

From 1989, he started a new inning in Ranchi as editor of Prabhat Khabar newspaper. He gave new life to this newspaper. When he started his work in this newspaper, its circulation had come down to just 400 copies but after that it became the best selling newspaper of Jharkhand.

Harivansh's media career was 40 years in total. During this time, if he gave enough space to rural journalism, then he also became the first newspaper to expose the fodder scam.

Harivansh worked for some time with Prime Minister Chandrasekhar as an additional media advisor. Chandrasekhar's government could run only for 08 months and with that, his innings also ended. Harivansh has a son and a daughter in his family besides his wife. Both are married.