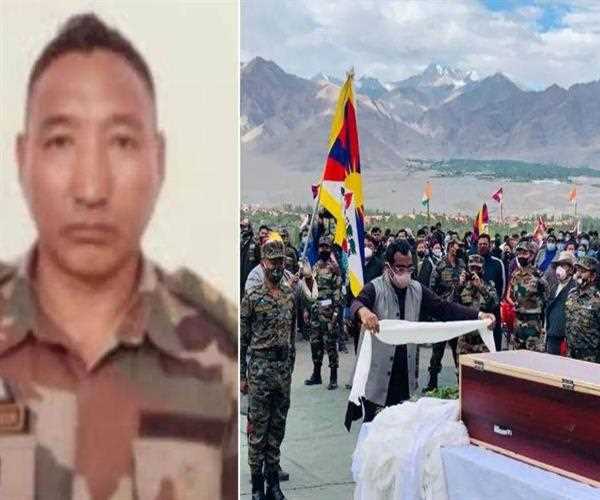 Bharat Mata ki Jai ... Jai Tibet ... Vikas Regiment (Vindas Regiment) Zindabad ... Along with these slogans, guns were fired from the air and on the final farewell of a soldier, he was awarded full military honours (Army Customs).

If a soldier is a martyr, he gets this honour, so what is special about it? The special thing is that this soldier, who was martyred while guarding the borders of India in Ladakh, was a Tibetan man, Indo-Tibetan Soldier, Subedar Nyima Tenzin.

Nyima Tenzin faced Chinese troops to defend the Indian border on the southern shore of Pangong Tso Lake and Nima sacrificed his life in a violent conflict in the area last week.

Some important things should be known about the Subedar Nyima Tenzin and the SFF in which he was posted.

Subedar Nyima was martyred in the important operation which was carried out on the night of 29 and 30 August by the Bharti Army to drive out the Chinese army from the important area near Pangong Tso in Chushul sector of Ladakh.

On 7th September 2020 when the last farewell was given to this brave soldier of 7 Development Battalion of 7 SFF, known as Establishment 22, Neema's body was wrapped in Tibetan flag along with the tricolour.

It is fair to call Nyima, who gave life for India, an Indian, but he was related to the Tibetan Refugee community who settled in India after the 1962 Indo-China War due to the excesses of China.

Not only this, Nyima Tenzin and her community continue to consider India as their home. According to the video which came out from the venue of the funeral, Neema's body was taken to Sonmaling Tibetan Refugee Camp in Leh in a truck from SFF.

51-year-old soldier Nyima was given a gun salute during the last rites in Ladakh and during this time his community cheered both India and Tibet lands.

The funeral took place with Buddhist rituals and mantras. Apart from Ladakh, the people said goodbye to Commando Neema by taking out a candle march to pay tribute to Neema at McLeodganj in Himachal Pradesh.

The Special Frontier Force, a security unit of which Nima Tenzin was a member, was formed after the 1962 war with China. At that time, thousands of Tibetan refugees arrived in India, hurt by the tortures of China. SFF was formed in India to give them an important role in security as well as shelter. However, later it was no longer a unit of Tibetans alone.

The SFF has played an important role in many military operations. The unit, comprising both men and women, has held important responsibilities from the 1971 war to the 1999 Kargil war.

The unit has seven battalions and is directly under the Cabinet Secretariat, which works closely with the Indian Army. Major General rank officer of the army is made the head of IG in this unit.