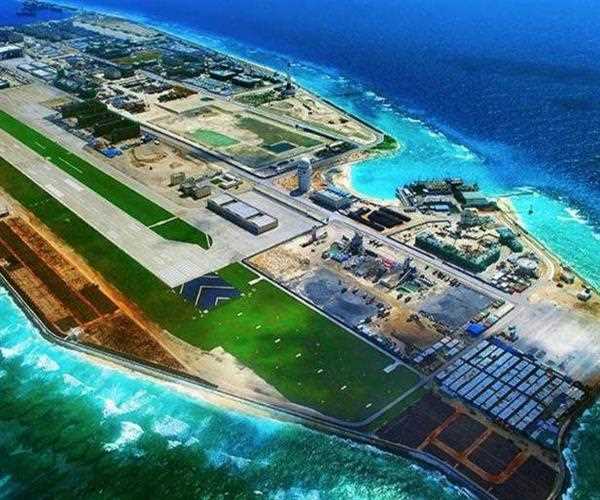 The tension between Ladakh and India has deepened. Meanwhile, China is also becoming aggressive in the South China Sea. It is scaring all those countries, who have been claiming their rights on the sea.

Even in the face of threats to countries and fear of war in deteriorating conditions, China has even made small fake islands in the sea. Here it's soldiers are deployed with their stockpiles. Know how China is making islands in the sea.

By the way, China is known for erecting the biggest structure in a few days. Even after the outbreak of Corona in Wuhan, China had set up a good hospital in a week. But China is able to build an island in water. China is building many artificial islands in the South China Sea, It has chosen a very easy way to make these islands.

It has created digging machines that dig soil from the sea level and put it on a coral reef. This makes the reef completely inundated and makes the island base strong. After that, the artificial island is sealed with cement. So that the Chinese army can use it. Then China deploys Chinese soldiers with heavy weapons on these fake islands.

By creating sea islands in this way, not only has China spoiled the political, civil and military balance around the world but it has also destroyed important natural structures like coral reefs. Experts are assuming that this step of China is threatening to end up on thousands of animals.

Now by calling these artificial islands as the land of China, it is establishing its dominance over the entire South China Sea. China's move has been criticized a lot, but now he has started saying openly that 80 percent of the South China Sea belongs to it.

By the way, the South China Sea is one of the most controversial geographical places in the world. According to global rules, the maritime boundary of a country is considered to be 200 nautical miles in the sea after its land boundary. But this international rule gets disputed in this sea situated between countries like China, Vietnam, the Philippines, and Malaysia.

It falls in the south-east of Asia. Its southern part touches the mainland of China. On the other hand, Taiwan holds its claim over the southeast. The east coast of the sea is connected to Vietnam and Cambodia. On the west coast is the Philippines.

Also in the northern area are the islands of Indonesia. Being connected to many countries in this way, it is considered to be one of the busiest waterways in the world.

International business worth $ 5 trillion is conducted every year through this route. This value is 20 percent of the world's total maritime trade. Through this ocean, China wants to go to the forefront of trade to different countries.

The biggest controversy is about the Parcel Islands. This part is a storehouse of crude oil and natural gases. Also, this sea, spread over about 3.5 million square kilometers, is full of coral and marine animals. So many types of fish are found here that around half of the fish business is supplied from here.

This is the reason that China also wants to usurp it through the ocean. Another reason is that due to being connected with many countries, this ocean is also of strategic importance. China, which intends to expand it, can benefit greatly.

China says that about 2 thousand years ago his fishermen discovered the islands of this sea. Although Japan occupied the entire South Sea during the Second World War, but soon after its defeat in the war, China started capturing it.

Soon after the war, China sent its warships and captured the islands here. Even after this, China also printed a map, in which it showed the islands here in its own right. Till then no country had objected. Later in the seventies, after the discovery of gas and oil deposits here, the real controversy started.

Now India along with strong allies like Japan, Vietnam, and the USA is seeking to put up a strong blockage front in front of the Red Dragon communist state. China only runs on power philosophy that is to feed the hunger of power and for which propaganda, war, threat, loan giving shark tactics are followed which either makes countries like Pakistan and Sri Lanka defenseless or dependent on it financially as well as strategically.

It is high time that the whole international community should strongly come together in order to displace out China's expansionist mode of operations in South China Sea.