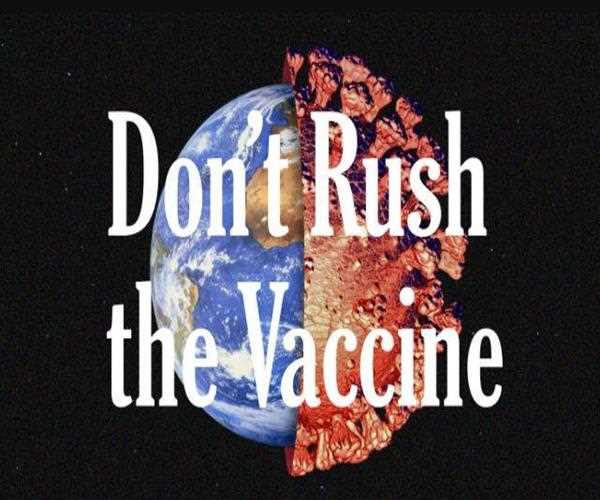 Why Coronavirus Vaccine Rush Is Not Ideal For Anyone

It usually takes a long time for any vaccine to be made. However, in the case of the corona vaccine, all the countries are showing great havoc. The vaccine is being linked to the scientific strength of the country. Here is a trackback of history of vaccination which gives us an idea of why the rush for the corona vaccine is good for humanity, do read and understand it.

At the same time, the countries which brought the vaccine, in the beginning, can benefit economically and politically. Assuming this, Russia launched the vaccine without completing the third trial. Scientists on the other hand are scared about it. They believe that haste on the vaccine can be fatal or fatal, as happened with the polio vaccine.

The early vaccine made in the year 1955 made more than 70 thousand children disabled. It is considered to be one of the biggest accidents in US medical history. Actually, polio disease was badly affecting then. In 1952, the biggest outbreak of polio occurred in America. During this time, 57,000 people were infected.

Then to prevent polio, children started spraying acid in their noses. Polio would not have been cured by this, but the ability of the children to smell was completely lost. Not only children, elders also had polio. Even American President Franklin D. Roosevelt had polio at the age of 39 and suffered paralysis from the waist down.

It was also mentioned by the scientist Paul A. Offit of the Vaccine Center in Philadelphia in his book 'The Cutter Incident.' Then the fear of polio in America was the highest after the nuclear bombs.

One such poll was also revealed. No one knew why polio was caused then. Because of this people were afraid to live a normal life. People stayed in masks and avoided shaking hands.

In view of this, scientists started making vaccines. In 1951, Pittsburgh scientist Jonas Salk received funding to make a polio vaccine. Within a few months, he claimed that the vaccine had been made. It was called Miracle Drug. It was tested before bringing the vaccine to market. Everything was correct Seeing this, pharma companies started getting licenses to make medicines. Cutter Laboratories was also one of them. There was a problem in this vaccine.

The test scientist Bernice E. Eddy took a sample from Cutter Laboratories in Berkeley to understand that there was something wrong with the vaccine when he vaccinated the monkeys. He also warned for this but it was ignored. 165,000 vaccine doses were sent to different parts of the country by writing 'POLIO VACCINE: RUSH'.

The vaccine was administered to 420,000 children. In a few weeks, negative reports started coming. It was a matter of April 1955. According to the Washington Post, the vaccine failed on 40,000 of these children. 51 children succumbed to paralysis and 5 children died. The vaccine was stopped within two months. Trial again. All the labs were tested again. After this they came in the market.

It is believed that there is a great difference in the making of a vaccine and its hundred percent safe. For example, in the year 2016, an attempt was made to prepare a vaccine Dengavxia for Dengue. But due to this, the condition of the dengue affected people became worse and there was a possibility of getting them hospitalized.

According to Michael Kinch, a scientist at Washington University in St. Louis, there is a high probability of such a situation occurring. In the case of the corona, it is even more dangerous because the infection is spreading continuously due to patients without any symptoms already.

In such a situation, if the people who have taken the vaccine to become corona positive and their symptoms are so mild that they themselves do not know about the disease, then in such a situation, they can act as carriers of the disease. That is, the rate of infection can increase further.

Now with Russia and China already claiming to make the corona vaccine we just pray to the almightly God that is suitable and safe for everyone. Now only time will tell what will happen eventually in the case of corona vaccine is getting developed or not.